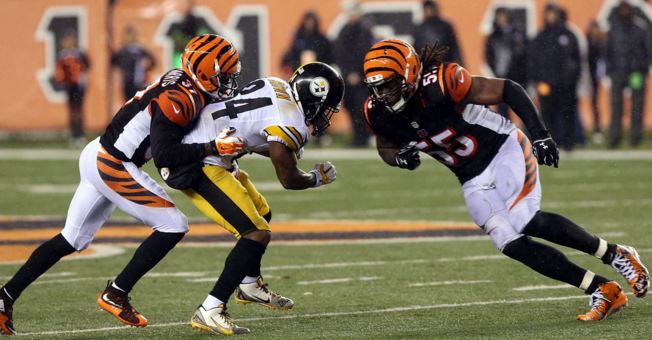 33 days ago, the Cincinnati Bengals crumbled in the fourth quarter against the Pittsburgh Steelers to lose 18-16 in an AFC Wild Card Game. The man at the epicenter of this mind-boggling meltdown was Bengals linebacker Vontaze Burfict.

The 4-year veteran from Arizona State has always been regarded as a controversial player, but he took his recklessness to a new level in this AFC North rivalry game. From slamming Ben Roethlisberger down during a third quarter sack to charging into Cincinnati’s locker room after intercepting a pass with less than two minutes left, Burfict undoubtedly had one of the most up-and-down performances in NFL history.

However, the linebacker saved his worst moment for the end, when he landed a brutal cheap shot on Steelers wide receiver Antonio Brown. The devastating hit resulted in a 15-yard penalty, and forced the concussed Brown to miss Pittsburgh’s next game against the Denver Broncos:

Burfict appealed the 3-game suspension he was handed down by the league, but appeals officer Derrick Brooks ruled to uphold the NFL’s punishment. By missing the first three games of next season, Burfict will lose $502,941 of his 2016 salary.

Since fines and suspensions have become the norm for Burfict since entering the league, he also met with Commissioner Roger Goodell to better understand how he could avoid future penalties. It’s rumored that Burfict and Bengals head coach Marvin Lewis were the ones to request the sit-down with Goodell, as it has become a common strategy for oft-disciplined players to meet with the Commissioner.

While it remains to be seen whether Burfict’s on-field behavior changes when he takes the field Week 4 of the 2016 season, the Bengals’ opponents in Weeks 1-3 are certainly breathing a huge sigh of relief.