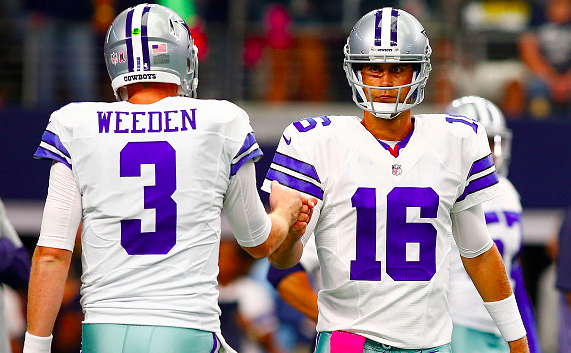 The Cowboys’ disastrous season continues to chug along with the announcement that Matt Cassel will take over for Brandon Weeden at quarterback. Substituting one mediocre journeyman quarterback for another, it’s hard to imagine the coaching staff truly believes Cassel can bring anything helpful to the table.

Rumors state the Cowboys coaching staff has already informed Weeden of the decision, and knowing his animated nature, he probably couldn’t have cared less. Getting paid whether he plays or not, Weeden is certainly more comfortable holding the clipboard all game.

Between the running back trio of Joseph Randle, Darren McFadden and Christine Michael, and the wide receiving corps of Terrance Williams and Devin Street, the Cowboys arguably have the worst set of skill players in the NFL. It’s so bad right now that lowly teams like the Tennessee Titans and Washington Redskins seem explosive in comparison.

The good news for the Cowboys is that it can’t get much worse than the past few weeks have been. Having already lost Dez Bryant and Tony Romo to injury earlier in the season, there is no one else on the field considered irreplaceable.

With Cassel now taking over at quarterback, things aren’t likely to improve. Possessing little to no athleticism and a career stat line of 96 touchdowns and 70 interceptions, Cassel surely isn’t the man to turn the Cowboys’ season around.

After Weeden surprisingly managed to start three games before being benched, Cassel might be given an even shorter leash. With Romo not expected to return until Thanksgiving, there’s plenty of time for Dallas to give other terrible quarterbacks an opportunity to play.

If the Cowboys can acquire a guy like Blaine Gabbert or Geno Smith, they could quickly become one of the best teams… in the Canadian Football League.