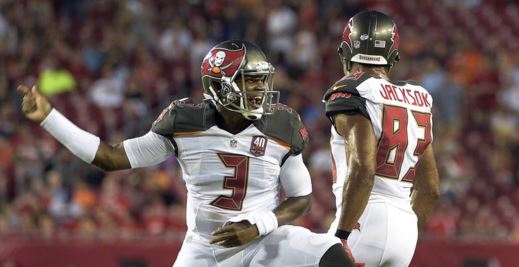 After a nightmare beginning to his career, the No. 1 pick in the most recent NFL Draft suddenly has his Tampa Bay Buccaneers at 5-5 and in the thick of the playoff hunt. Winners of three of their last four, the Bucs’ dramatic turnaround has to be heavily attributed to Winston’s development.

The former Florida State Seminole became just the third rookie quarterback in NFL history to throw for five passing touchdowns, as Winston picked apart a helpless Philadelphia Eagles defense. Connecting with five different receivers on the scores, Winston has shown improved accuracy and decision-making as the season has progressed.

While skeptics were quick to jump on the Mariota bandwagon early in the season, Winston is making a strong push for Offensive Rookie of the Year consideration. With 2,405 passing yards, 15 touchdowns and nine interceptions, Winston’s efficiency has been surprising given his horrendous start.

Currently ranked 16th among NFL quarterbacks with a Total QBR rating of 60.9, Winston actually ranks ahead of Philip Rivers, Russell Wilson, Cam Newton, Matthew Stafford, Andrew Luck and Peyton Manning in this category. As the most comprehensive analysis of quarterback play, it’s remarkable to see Winston rank so highly against the NFL’s best.

Of course, Winston isn’t the only reason for Tampa Bay’s turnaround. The reemergence of Doug Martin as a respectable NFL running back has been paramount to Winston’s success. This has forced defenses to play man coverage against lanky receivers Mike Evans and Vincent Jackson, and Jameis has done a tremendous job of exploiting this.

Winston’s ability to put his teammates in position to make plays has transformed the Bucs into a dynamic offense. Only one game back of the Atlanta Falcons for a Wild Card berth, it has become clear that Tampa Bay made the right choice with the No. 1 pick.

As long as Jameis Winston can continue to improve and avoid embarrassing seafood incidents, the name ‘Shameis’ will no longer be applicable.