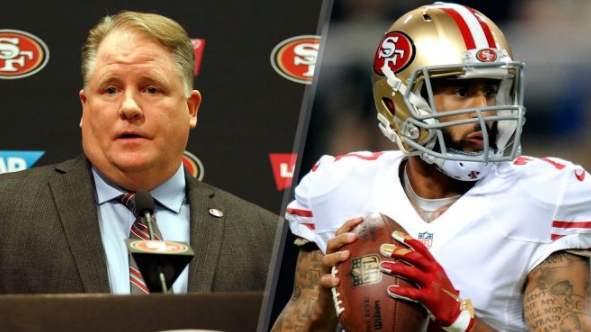 Even though Chip Kelly has yet to coach a single second of 49ers football, his time in San Francisco has already been surrounded by chaos. In a tumultuous offseason that saw franchise quarterback Colin Kaepernick demand to be traded at one point, it appears the bad blood between the two sides is finally settling for Kelly’s new squad.

Following San Francisco’s mandatory three-day minicamp, Kaepernick stressed that he is happy to still be a 49er, telling the media, “I was happy to get back on the field this week. Everything’s coming along and progressing as planned. At this point I can really start to get rolling. I’m excited to get back on the field, get healthy and be ready for this training camp.”

Kaepernick has had three surgeries this offseason and has yet to take any practice reps, putting him at a serious disadvantage entering training camp. Blaine Gabbert, Kaepernick’s replacement after he was benched last season, has taken the first-team reps under Chip Kelly’s new system thus far.

And while Kaepernick has plenty of catching up to do, he is still expected to be the 49ers’ starting quarterback entering the 2016 season. Kelly has stressed all along that Kaepernick and Gabbert will compete for the starting job, but Kaepernick’s ability as both a runner and passer better suits Kelly’s high-tempo offense.

With Kaepernick eager to move past his antics over the past few months, he has made it clear that he is coming in with an entirely new mindset. “[I’m] definitely not the same person. What I try to do is grow. And that’s not just on the football field, that’s in life, that’s in my relationships, that’s in everything. So, to me to be able to grow and have that growth, it’s something that I strive to do. And I think that’s something that I took a big step in this past year.”

After a disappointing 5-11 season last year, the 49ers are hoping Kaepernick’s growth and Chip Kelly’s arrival can turn San Francisco back into a perennial powerhouse.