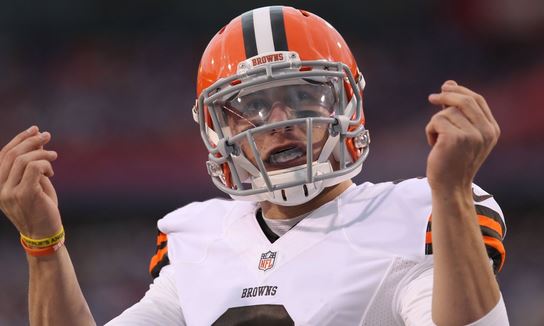 To the dismay of many, the Cleveland Browns have announced that Johnny Manziel will not be starting in the Browns Week 3 match-up against the Oakland Raiders. Former starter Josh McCown will take back his spot as the lead signal caller after suffering a concussion in the team’s first game.

It’s been two years since McCown’s magical season with the Chicago Bears, where he totaled 13 touchdowns and just one interception after Jay Cutler went down for the season. After a mediocre season with Tampa Bay, McCown signed with Cleveland this year to battle with Manziel for the starting job – a job that McCown would end up winning in the off-season.

Even after a solid showing against the Titans last Sunday, the Browns have made it clear that it’s McCown’s job to lose as long as he’s healthy. The Titans defense is not something opposing offenses fear, but Manziel displayed the ability to throw the ball down the field, and manage a winnable game. That isn’t to say McCown hasn’t shown those abilities as well, but there comes a time when a team should at least try to see what they have with a first-round pick.

Johnny Manziel has lost quarterback battles to Josh McCown and Brian Hoyer in his two seasons after being selected 22nd overall in the 2014 draft. Most experts knew that the Heisman winner would experience some growing pains adjusting to the NFL style of play, but failing to win the starting quarterback job against two career journeymen makes the future outlook for “Johnny Football” look pretty grim.

However, that outlook can change in an instant as a McCown turnover, a few three-and-outs, or an (unfortunate) injury could have Manziel immediately back on the field. But if Merril Hoge is right in his analysis, Manziel returning to the field is the last thing Browns fans should want.