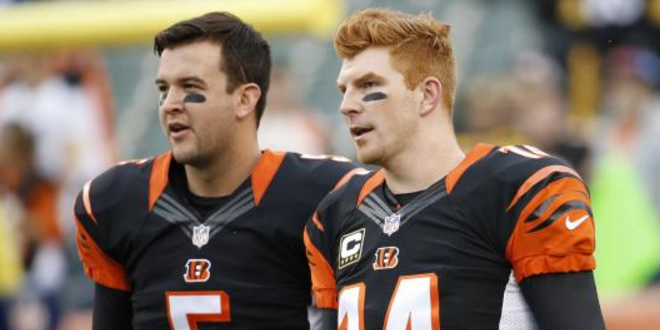 Going into Sunday’s Wild Card match-up with their division rivals, the Cincinnati Bengals still don’t know if Andy Dalton will be starting at quarterback for them. For the past four games, AJ McCarron has filled in for the injured Dalton who is still recovering from a broken thumb on his throwing hand.

However, if history is any indication, the Bengals would be wise to keep the clipboard in Dalton’s hands against the Pittsburgh Steelers this weekend.

Since 2011, Cincinnati has played in four playoff games with Dalton running the show, which has resulted in four straight losses. In those games, Dalton has thrown 1 touchdown and 6 interceptions with a 55.7 percent completion percentage.

Despite all of the negativity swirling around Dalton and Coach Marvin Lewis’ winless streak in the playoffs, AJ McCarron likely won’t be the answer either. He has 6 touchdown passes over his first four starts, and has yet to throw for over 300 yards in a game.

However, Dalton’s recent injury gives Cincinnati no other choice but to roll the dice with McCarron. His 2-2 record doesn’t look too enticing, and he already lost to the Steelers (33-20) in Week 14. A lot can change in the NFL in a month though, and the Bengals have actually split the season series with Pittsburgh.

Also in the Bengals’ favor is McCarron’s collegiate experience. While he has never competed in an NFL playoff game, he showed an innate ability to step up in big games while playing at the University of Alabama (something Dalton never did at TCU).

McCarron will need to keep up his trend of playing well in big games if he wants head coach Marvin Lewis to still be in charge next season. But if he fails to do so, he can at least take solace in knowing Dalton (probably) wouldn’t have done much better.