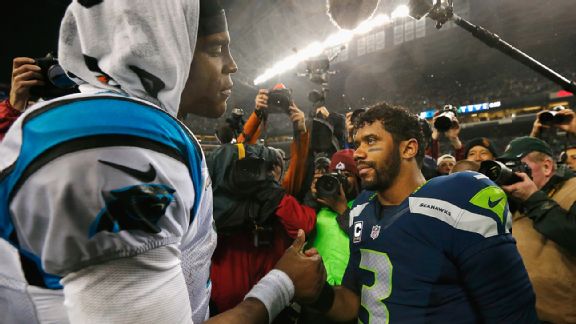 While both teams have high aspirations for this year after winning their respective divisions, few expected the Carolina Panthers to be the undefeated squad in this match-up. Let’s take a look at where both teams stand at this point in the NFL season:

Behind a formidable defense hand-picked by head coach Ron Rivera, Carolina seems fully capable of making the playoffs once again. Even though top receiver Kelvin Benjamin tore his ACL in the preseason, Newton has made the most of his receiving corps by relying on star tight end Greg Olsen. Olsen has instilled so much fear in opposing defenses that he has enabled Ted Ginn Jr. (yes, you read that right) to be a legitimate receiving threat.

Jonathan Stewart will never be more than an average NFL running back, but the Panthers don’t overwork him and are able to lean on Newton and fullback Mike Tolbert to aid in the running game. Considering that the Seahawks secondary has shut down Cam in the past (including their 2015 playoff game), the Panthers’ running game will be vital if they are to remain undefeated.

Despite a current record of 2-3, Seattle’s three losses certainly don’t stem from a lack of talent. Wilson hasn’t done anything wrong as the Seahawks’ game manager, but he is getting very little help from his receiving corps and offensive line.

Seattle’s bell-cow Marshawn Lynch has missed the past two games, forcing undrafted rookie Thomas Rawls into the lead back role. While Rawls has been surprisingly good, Lynch’s absence has forced Wilson to carry the burden on offense. With the defense merely looking good instead of elite this season, the offense has been unable to pick up the slack. The Seahawks will need Wilson to play his best game of the season if they are to keep up their dominant ways at CenturyLink Field.

The threat of Newton and Wilson escaping the pocket should be limited due to the exceptional linebacker units on both teams. Expect both defenses to incorporate quarterback spy packages to limit the scrambling opportunities for the opposing team. The Panthers rely heavily on their rushing game because of Cam’s dual threat play-making abilities, which means they’ll look to pound the ball against Seattle’s semi-susceptible rush defense.

If Lynch sits out again, the Seahawks will rely on a more pass-heavy approach and their tremendous home-field advantage. Both teams are supremely talented and might meet in the playoffs at some point, but Seattle is just too good at home for Carolina to stay undefeated.