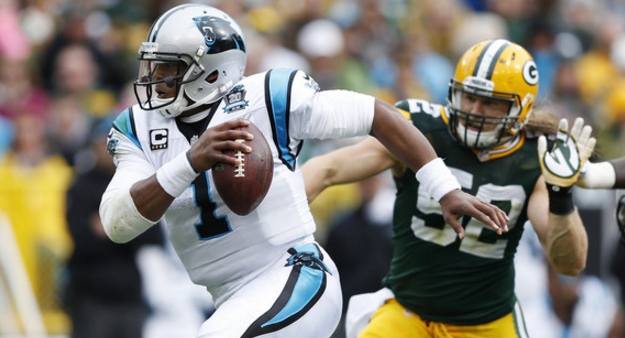 We aren’t talking about last week’s thriller against the Indianapolis Colts on Monday Night Football. Facing the Green Bay Packers this week, it felt like déjà vu watching the Panthers crumble in the fourth quarter. However, just like last week, the Panthers were able to escape with a win to stay unbeaten.

For the first three quarters, the Panthers were absolutely dominant. The Luke Kuechly-led unit got to Aaron Rodgers at will, as Green Bay’s receivers struggled to beat man coverage for the second consecutive week. After coasting through their first six games, Rodgers and the passing attack now seem to be feeling Jordy Nelson’s absence.

As out of sync as the offense has looked the past two games, Green Bay’s defense has now given up at least 400 total yards of offense in their last three games. Green Bay’s frustration reached its boiling point in the fourth quarter when Ha Ha Clinton-Dix got in a scuffle with B.J. Raji and Julius Peppers.

While it obviously was not a great moment for the Packers, it did spark a dramatic turnaround in the game. Trailing 37-14 when the altercation took place, the Panthers began doing everything in their power to try to lose. Whether it was going three-and-out, allowing two point conversions, giving up 4th down conversions or throwing interceptions in your own red zone, you name it, and the Panthers did it in the fourth quarter.

But despite all of the miscues, the Panthers managed to hang on.

With this possibly serving as the prequel to this year’s NFC Championship Game, both teams learned some very valuable lessons. The Panthers know they must be up at least three possessions with five minutes left in the game, and the Packers will need to get into a sideline scuffle in the second quarter (instead of the fourth) if they are to beat Carolina.

Either way, a rematch between these two teams with a trip to the Super Bowl on the line would be one hell of a game.