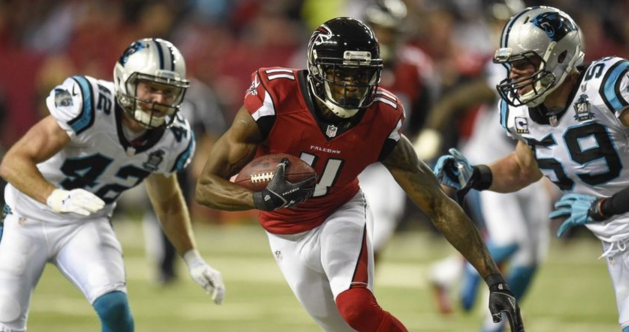 One of the most improbable unbeaten streaks in NFL history has come to an end as the Carolina Panthers lost to the Atlanta Falcons on Sunday.

The Falcons took a 14-10 lead after Julio Jones made a play that only Julio Jones can make. Facing a 3rd & 13 from their own 30-yard line, Matt Ryan lobbed one up into double coverage, but as usual, Julio figured out a way to come down with it. Both Panthers defending Jones fell during the play, allowing the star wide receiver to easily jog into the end zone.

The play summed up Carolina’s game, as their lackadaisical effort and inability to move the ball through the air gave them a much-deserved loss. Newton wasn’t in his usual “Superman” form, totaling 142 passing yards, 46 rushing yards and one total touchdown.

The MVP frontrunner was severely outplayed by Falcons quarterback Matt Ryan, and will need to play much more efficiently if the Panthers are to make it through the NFC.

Running back Jonathan Stewart returning to full health will surely help relieve some of the offensive burden currently on Newton, but the Falcons clearly exposed some of Carolina’s weaknesses. Lacking a reliable pass-catcher beyond tight end Greg Olsen, the Panthers could have trouble keeping up with high-octane offenses like the Arizona Cardinals and Green Bay Packers.

The Josh Norman-Julio Jones match-up didn’t disappoint, as the NFL’s receiving leader got the better of the confident cornerback to the tune of nine receptions, 178 yards and the aforementioned touchdown. Although the touchdown was on Luke Kuechly and safety Kurt Coleman, Jones did a majority of his work on Norman and once again proved himself as the cream of the crop at the receiver position.

Carolina has already clinched its first-round bye, and Atlanta will need a ton of help to sneak into the playoffs, but for now, the Falcons can enjoy their sweet victory to its fullest.