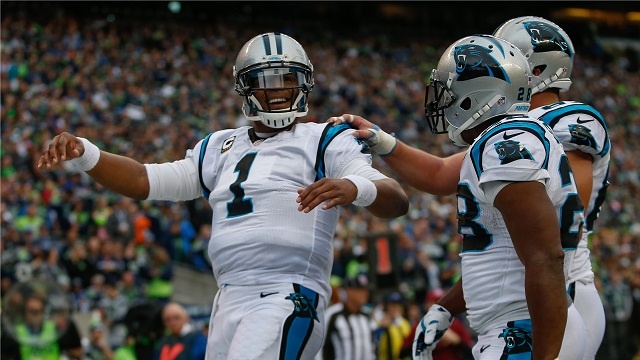 The Carolina Panthers silenced many critics with an impressive come-from-behind road victory over the defending NFC Champion Seattle Seahawks.

Coming off of their bye week, the now 5-0 Panthers pulled out a statement victory in which Carolina’s defense outshined the polarizing, “Legion of Boom.” The Seahawks’ struggles this season have been well documented, but not many would have pinned the overachieving Panthers to leave CenturyLink Field with a victory.

Billed as a game between two defensive juggernauts, both offenses predictably struggled throughout the game. The Panthers had some success moving the ball, but were ailed by two interceptions from star safeties Earl Thomas and Kam Chancellor.

Cam Newton didn’t play his best game as a pro, but made just enough plays down the stretch. The former Auburn Tiger connected with star tight end Greg Olsen (who was inexplicably wide open) for a 26-yard touchdown in the final minute to seal the victory.

Newton has faced his fair share of critics since entering the league. His shaky accuracy and questions about his leadership abilities have been heavily scrutinized. However, his play this season should certainly put those questions to rest. He will never be the accurate passer Rodgers, Manning or Brady are, but his skills as a football player and his knack for performing in crunch time are crucial to Carolina’s success as a team.

It doesn’t hurt that Newton has one of the NFL’s best defenses to rely on – a squad that got an enormous lift this week with the return of All-Pro linebacker, Luke Kuechly. The Boston College product’s presence and tackling ability were felt in his first game back from a concussion, totaling 14 tackles and making plays all over the field. The return of Kuechly and contributions from Thomas Davis and Josh Norman has helped build a case for the Panthers being the top defensive unit in the league.

With the Falcons going down earlier in the week, the Panthers now stand alone atop the NFC South. Newton’s continued development combined with an elite defense makes Carolina a legitimate (and intimidating) Super Bowl contender.