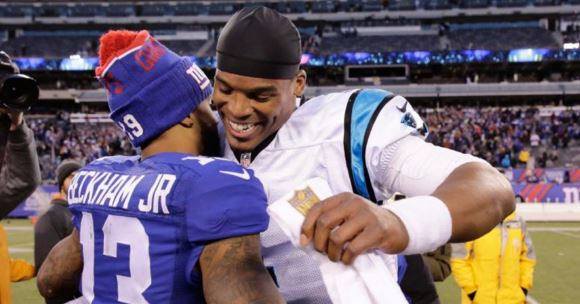 Up 35-7 against the New York Giants with two minutes left in the third quarter, Cam Newton looked calm and confident. Tied 35-35 with 1:46 remaining in the game, Newton was just as relaxed.

Starting with the ball at his own 26 yard-line, Newton led a brilliant game-winning drive, capped off by a 43-yard Graham Gano field goal. Winning games in this fashion has become the norm for Newton and the Carolina Panthers, making it easy to lose sight of how incredible he has been this season.

While much of the attention after the Panthers’ win was focused on the Josh Norman-Odell Beckham Jr. war of words, Newton quietly made history on Sunday. Becoming the first quarterback in NFL history to throw for 300 yards, rush for 100 yards and throw five touchdown passes, Newton officially locked up the MVP award.

That’s not a knock on MVP candidate Tom Brady (who has been nothing short of sensational), but Newton does things on the field that Terrific Tom simply cannot. His ability to evade pass rushers, inflict damage on would-be tacklers and still throw the ball powerfully/accurately is a combination at the quarterback position that has never been seen.

Of course, it only helps his MVP candidacy that he has led his Panthers squad to a perfect 14-0 record. Games against the struggling Atlanta Falcons and Tampa Bay Buccaneers serve as the last two obstacles, making regular season perfection for the Panthers appear inevitable.

The postseason will be an entirely different animal for the Carolina Panthers, but with two games left in the regular season, their franchise quarterback has already won some impressive hardware.