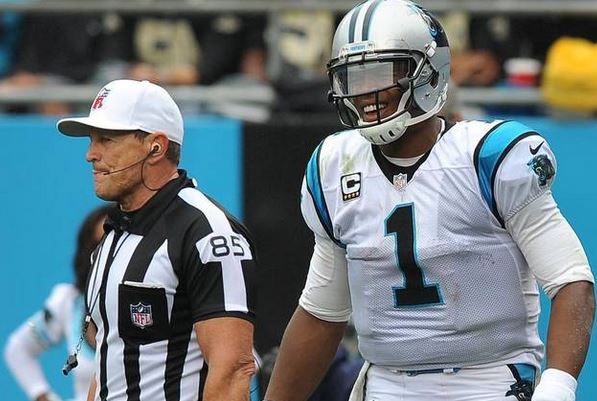 In one of the more bizarre stories to emerge from Week 3 in the NFL, veteran referee Ed Hochuli suddenly finds himself amidst controversy. In the New Orleans Saints-Carolina Panthers game, Cam Newton thought a flag should have been thrown on a play in which he believed he was hit late. Hochuli saw the play differently, and Newton claims the ref explained he didn’t get the call because “he wasn’t old enough.”

34-year-old Luke McCown of the New Orleans Saints received a personal foul call earlier in the game, which of course made Hochuli’s age comment look even worse.

Much like when Shaq played in the NBA, Newton’s ability to absorb punishment and make hits look less severe than they really are can sometimes be a detriment. If there truly is a double standard when it comes to protecting quarterbacks, Newton has certainly been on the losing end throughout his career.

Perhaps the strangest part of this whole story is that Hochuli vehemently denies making a comment to Cam about his age. It would make no sense for Newton to lie about this exchange, and Hochuli doesn’t have anything to gain by mixing it up with a player.

Normally, you would tell a referee to avoid getting on the bad side of someone like Cam Newton, but if I had to bet on a ref to beat up NFL players, my money would be on Ed Hochuli. I don’t know if Hochuli is wearing a youth small T-shirt or if he can bench press 500 pounds, but the guy is one sudden movement from refereeing shirtless.

At the end of all of this hearsay, Hochuli will probably be suspended for a few games to appease NFL players and make sure refs don’t feel as if they can say whatever they want. If there’s anything we’ve learned recently, it’s that Commissioner Roger Goodell always does what’s in the best interest of the players.