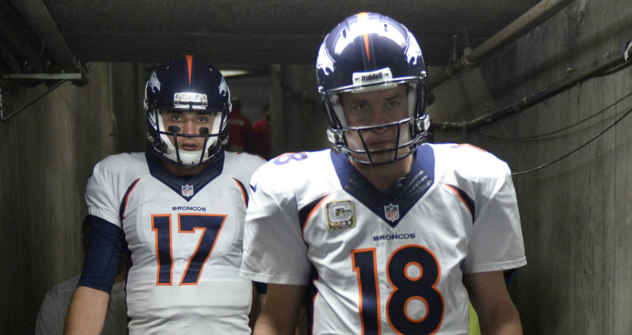 With the playoffs looming, the Denver Broncos have multiple questions swirling amongst their organization. After an embarrassing loss to the Oakland Raiders on Sunday, many are wondering whether Brock Osweiler is still the man for the job, or if Peyton Manning deserves round two with Denver.

As Peyton looks to commence practicing again this week, the competition for the starting role should begin to heat up. Though Osweiler currently sits at the top of the depth chart, Manning is swiftly approaching (even though he has zero speed whatsoever).

On Monday, head coach Gary Kubiak spoke about Manning’s return to the practice field, calling it “the next step.” Kubiak’s words somewhat foreshadow Manning’s quick restoration under center. His experience and playoff prowess might be the turning point in this saga, as Brock Osweiler simply does not have the experienced intangibles to keep up with the old man.

This week, the Broncos have a difficult road test against the red-hot Pittsburgh Steelers at Heinz Field. With major playoff implications at stake, this game will also serve as Osweiler’s last chance to make a case to remain as Denver’s starting quarterback.

Realistically, it would make Kubiak’s job much simpler if Osweiler struggles again this week. While Peyton has looked far from his former self this season, he is still a Super Bowl-winning quarterback that knows what it takes to win in the playoffs.

In his first NFL season with consistent reps, Osweiler simply isn’t ready to lead this team to their first Super Bowl since 1999. It’s a job for Peyton Manning, but only time (and his plantar fasciitis) will tell if he’s up for the challenge.