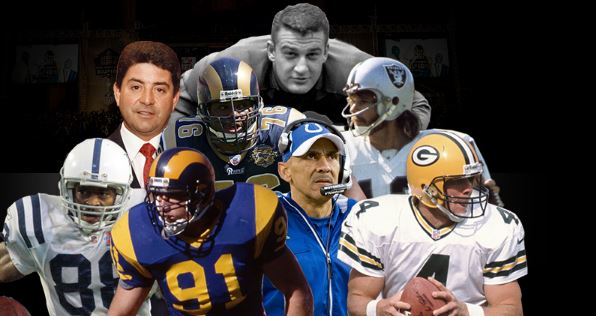 On Saturday night, 8 legends will etch their names in history as they are officially inducted into the NFL Hall of Fame. The list features 2 quarterbacks, 1 wide receiver, 2 offensive lineman, 1 linebacker, 1 coach and 1 owner.

Let’s take a look at each inductee’s biggest accomplishments that have earned them a spot in Canton, Ohio: The headliner of the 2016 Hall of Fame class, Brett Favre is the only inductee voted in during his first year of eligibility. Although he only won one Lombardi Trophy, the gunslinger won 3 straight MVP awards (1995-1997), was selected to 11 Pro Bowls and is second all-time in passing touchdowns (508) and passing yards (71,838). One of the greatest wide receivers in NFL history, it surprisingly took Harrison three tries to be voted into Canton. The longtime Colt formed one of the deadliest quarterback-wide receiver duos of all-time with Peyton Manning, connecting for an NFL-record 118 touchdowns (the second-most is 92). With 14,580 yards (7th all-time) and 128 touchdowns (5th all-time) during his 13-year career, Harrison’s induction is certainly well deserved. As one of the greatest blind side protectors to ever play the game, it’s shocking it took Pace two years to be selected by the committee. The 1997 No. 1 overall pick spent his first 12 seasons playing for the St. Louis Rams as a key contributor to the “Greatest Show On Turf.” During those 12 seasons, Pace helped St. Louis win Super Bowl XXXIV and was selected to 7 Pro Bowls and 3 All-Pro teams. Sadly, Stabler is one of two members in this class who has passed away. “Snake” helped lead the Oakland Raiders to a Super Bowl XI victory and won the MVP award in 1974. The 4-time Pro Bowler and 2-time All-Pro will be presented by his former coach and current Hall of Fame member, John Madden. The 13th time proved to be the charm for the 15-year linebacker, as Kevin Greene finally received the recognition for his Hall of Fame worthy career. Greene compiled 10 seasons of at least 10 sacks, and has 160 total sacks in his career. With 5 Pro Bowl selections and 3 All-Pro selections, Greene has undoubtedly earned a spot in Canton. In 13 seasons as a head coach, Dungy compiled an impressive 148-79 record, but his impact on the game of football goes way beyond that. In 2006, Dungy became the first African-American head coach to win a Super Bowl, and has helped pave the way for minorities to earn coaching gigs in the NFL. Along with Stabler, Stanfel is the other member of the Hall of Fame class who unfortunately passed away. The offensive lineman only played seven seasons in the NFL, but was selected to the Pro Bowl and All-Pro team 5 times, and won the 1953 NFL Championship Game with the Detroit Lions. DeBartolo Jr. is the lone owner to be inducted into the 2016 Hall of Fame class. DeBartolo Jr. owned the 49ers from 1977-2000, a time period in which San Francisco experienced a prime few organizations can match. With five Super Bowl victories in those 23 years, the stability DeBartolo Jr. provided at the top of the franchise was a key part of the team’s success.