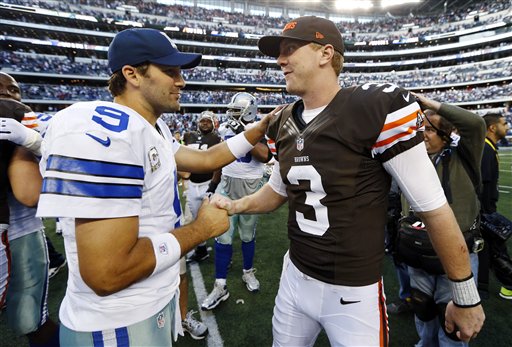 Just two weeks into the young NFL season, the Dallas Cowboys’ Super Bowl hopes seem to be dwindling. Injuries to star players Dez Bryant and Tony Romo have gamblers wishing they had gone with their initial instinct to bet on literally any other team to win the Super Bowl.

All kidding aside, the Cowboys roster has been littered with talent over the past few years, but a few bad breaks and unlucky plays have left America’s Team without a Super Bowl since 1995.

Now, it’ll be up to Brandon Weeden – the (what feels like) 51-year old quarterback – to lead this Cowboys offense for the next few months. That can’t possibly sound good for Cowboy fans. However, the Cowboy faithful will hold out hope that the talented defense and best offensive line in the league can keep the ship afloat.

Even with an elite offensive line intact, the Cowboys running back trio of Joseph Randle, Darren McFadden and Lance Dunbar has struggled to find room to run. This will be imperative to the Cowboys success in the coming weeks, as there’s nothing more terrifying than having Weeden air the ball out to Terrance Williams and Jason Witten 30 times a game.

Weeden has undeniable arm strength and throws the ball with great zip, but his accuracy and decision-making has been suspect. With a 5-16 career record while starting for the Cleveland Browns, his poor stats aren’t completely indicative of his talent. Now having a perfect opportunity with the Cowboys, Weeden has the chance to prove himself worthy of his first-round draft pick status.

The Cowboys seem to have the talent around Weeden to succeed just enough in a division with three other mightily struggling teams. The Giants are 0-2, albeit two very close losses, the Eagles offense looked abysmal versus the Cowboys defense last week, and the Washington Redskins, although having an inspirational win against the talented St. Louis Rams this past week, are still the Washington Redskins.

The division by no means belongs to any of the four teams, and now with Romo on the mend for at least a couple of months, the race for the NFC East crown is as competitive as ever.