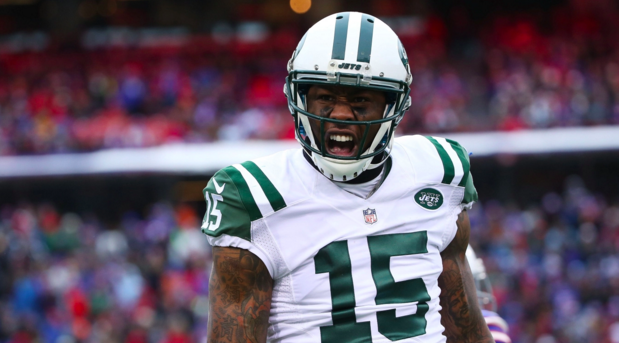 An emotional Brandon Marshall, receiver for the New York Jets, testified in federal court Thursday, denying that he punched a woman while fleeing a Manhattan nightclub four years ago.

At his civil trial, Marshall told a jury that he feared for his life while fleeing the club, and never hit the woman who had sued him for unspecified damages. After fights broke out, including Marshall’s wife being hit in the mouth with a bottle, Marshall and former NFL receiver Mike Sims-Walker ran away.

As Marshall testified about what happened to his wife, he got choked up. The resulting injuries from the bottle hitting her included a cut mouth, and the loss of a few teeth.

“The cut was the really scary part,” he said. “I have never heard her cry like that.”

While Marshall and Sims-Walker fled from men chasing them, Marshall recalled thinking, “If you fall, you’re dead,” worrying the men had weapons on them.

Christin Myles, of Chino, California, testified that she knew it was Marshall because of a tattoo on his forearm. However, a surveillance video appeared to show Marshall’s arms covered by sleeves while he was outside.

Marshall claims the video frames showing his arm move forward at the time of the alleged punch was actually the moment when he pushed Sims-Walker so they could get away, and resulted in him tripping on the sidewalk. The two men eventually escaped the melee by running through oncoming traffic.

The jury ultimately ruled in favor of Marshall, stating no assault took place and that the Jets’ wide receiver was not responsible for damages.

It comes as good news for Marshall and the New York Jets, as both sides hope this 2012 fiasco will simply become a thing of the past.