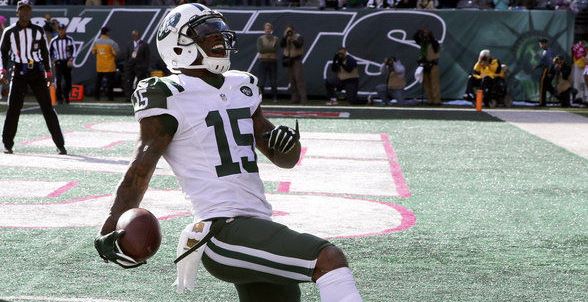 If you want to attribute the Jets’ new-found offensive competency on one player, look no further than their outspoken, ageless wide receiver, Brandon Marshall.

When the Marshall trade was completed during the offseason, not many would have guessed the 31-year old would have much left in the tank. Marshall failed to reach 1,000 yards for the first time since his rookie season, and all signs pointed to him fading into obscurity for the remainder of his career.

Marshall has been anything but mediocre – recording 37 catches for 511 yards and four touchdowns through the team’s first five games. With 54 targets thus far, he has twice as many as any of his teammates. His ability to command double teams has opened up the running game, allowing Chris Ivory to flourish.

Marshall’s play has made Fitzpatrick seem worthy of being a starting quarterback in the NFL, while also reminding fans that Jay Cutler can make ANYBODY look worse than they are.

The way the Jets are currently constructed, it bodes well for them to stick to a ground and pound game. But to be successful in today’s NFL, a run heavy offense needs a receiver with size capable of beating man-to-man coverage.

That’s where Brandon Marshall has been crucial.

With the way the Jets’ offense has been producing, the decision to trade a fifth-round pick for Marshall seems like one of the most lopsided deals of the offseason, especially when considering how much the Seahawks gave up for tight end Jimmy Graham.

In order to keep this momentum, the Jets must continue to feed their former All-Pro. If they don’t, we know Marshall has no problem sharing his displeasure with the world.