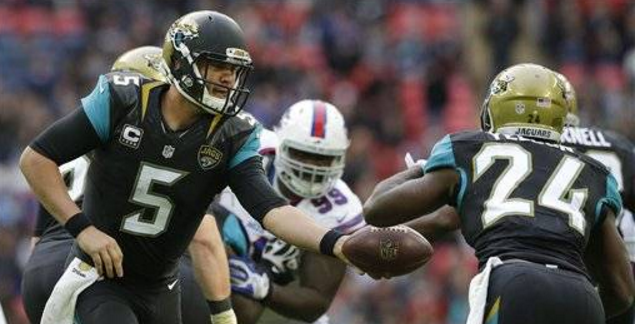 Despite awful starts for the Tennessee Titans (2-7) and Jacksonville Jaguars (3-6), both teams are still in the thick of the playoff race. Beneficiaries of the competing in the abysmal AFC South, every member of the division currently finds themselves under .500.

With the Indianapolis Colts and Houston Texans leading the division at 4-5, both the Titans and Jaguars have the perfect opportunity to make up some ground in this match-up. While neither squad appears to be playoff-caliber, this game holds more weight than one might first assume.

Here are the key players to watch during this AFC South showdown:

Mike Mularkey – Head Coach
The coach has only been around for two games, but he won a big one in overtime against the New Orleans Saints in his debut. Since taking over the team, the coach has kept the quarterback in the pocket more often and the results have been encouraging. The team should be able to draw up better offensive plays this week. Besides, the Jags defense is just a bunch of malarkey anyways (sorry, had to do it).

Marcus Mariota – Quarterback
He has looked like a legit starter this year, despite lacking eye-popping talent alongside him. The defending Heisman Trophy winner has 13 touchdowns and six interceptions on the season to go along with a 98.3 passer rating. He should continue to flourish and have a strong game against Jacksonville.

The Jerseys – Head-to-toe Light Blue
As part of the NFL’s “Color Rush” campaign, the Titans will be decked out in powder blue on Thursday. Last weekend, there were several complaints about the jerseys in the Jets-Bills game. It looked like a Christmas game with the red and green, and proved to be a nightmare for color blind people. These jerseys might be so ugly, people will be wishing to be color blind.

Blake Bortles – Quarterback
The second year product out of Central Florida has showed signs of developing into a franchise quarterback this year. He has 19 touchdowns and 11 interceptions on the season, along with an 81.0 passer rating. Bortles needs to continue to feed his playmakers, especially against a suspect Tennessee defense.

Jason Myers – Kicker
Last week, Myers hit a 53-yard field goal as time expired to beat the Baltimore Ravens. His job was in jeopardy after missing a 26-yard field goal earlier in the game, but that now feels like a distant memory. Jacksonville tends to struggle in the Red Zone, so Myers could be in for a huge week.

Prediction: Elvis Dumervil gets traded to the Titans, commits another costly penalty with no time on the clock, and ‘leads’ the Jaguars to a 24-21 win.