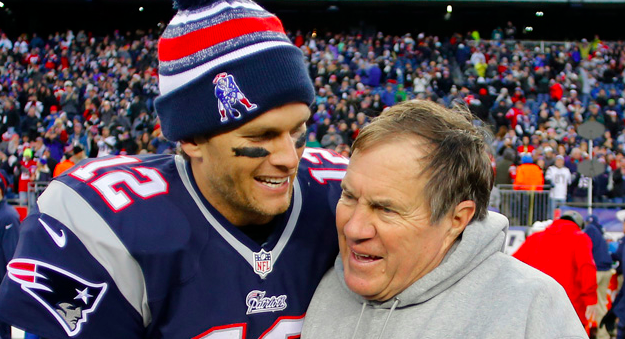 Tom Brady is arguably the most accomplished quarterback in NFL history, and has done all of it with only one head coach – Bill Belichick. With consistent success since Brady took the reins in 2001, it’s far from surprising to hear the mutual admiration the coach and player share for one another.

While Brady has always been quite vocal in discussing Belichick’s brilliance, the enigmatic coach seldom offers praise publicly. However, a question-and-answer session in which Belichick was the keynote speaker resulted in a rare gushing period by the Patriots’ coach.

Belichick referred to Brady as the “greatest quarterback of all-time” and went on to say he is a “tremendous leader and tremendous player.”

The stats back up Belichick’s assertion, as Brady has an NFL record-tying 4 Super Bowls, 2 league MVPs and has thrown for 58,028 yards, 428 touchdowns and 150 interceptions in his career.

Later in the session, Belichick was asked how he and the Patriots have managed to stay at the top for so long. With 6 Super Bowl appearances, 10 AFC Championship Games and 14 double-digit win seasons over the past 15 years, New England has been the gold standard for NFL franchises this century.

Belichick said “great leadership with the Kraft family up at the top” has been a key reason for New England’s consistent excellence, as well as the franchise’s ability “to be an outlier in some respects.”

The Patriots have been trendsetters since Belichick came to New England, from implementing the 3-4 defensive scheme to refusing to overpay for replaceable skill position players.

No one can argue with the results, and with Brady and Belichick showing no signs of slowing down, the greatest coach-quarterback tandem will only continue to add to their legacy.