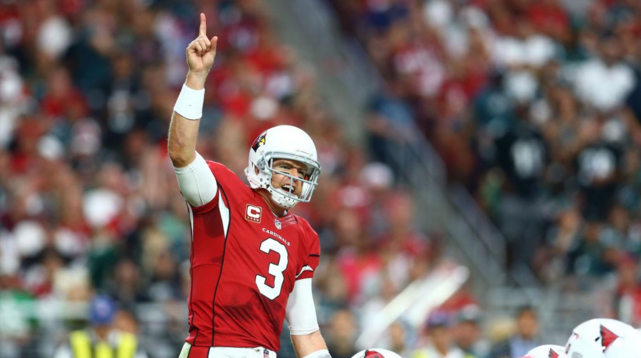 Whoever snagged Carson Palmer early off the waiver wire must feel on top of the world. It’s rare when a quarterback exceeds not only his team’s expectations, but also those of well-renowned fantasy football experts.

In standard leagues, Palmer has put up a minimum of 16 points every week as he attempts to revive his injury-plagued NFL career. Since coming out of USC, he’s simply failed to live up to the monumental hype that caused him to be a No. 1 pick. However, this season has a different feel to it.

The Cardinals possess a well-balanced defense that continues to thrive without Todd Bowles, who was hired to be the Jets head coach last offseason. They have a ton of playmakers in their secondary, which serves as the backbone to their aggressive defense. Arizona’s success defensively has had a direct correlation to Palmer’s success on offense.

Given that Arians loves to throw the deep ball, the Cardinals have surrounded Palmer with three stud receivers that complement each other’s games well. Larry Fitzgerald remains the No. 1 receiver, and he’s still making plays despite being over thirty years old. Michael Floyd possesses natural abilities as a tall playmaker with reliable hands and a wide frame. And last but not least, their third option, John Brown, spent the entire offseason with Carson and allegedly doesn’t eat fast food, meaning he might be the fastest player in the NFL.

Arizona’s passing attack has been so effective due to the establishment of a consistent rushing attack. Chris Johnson re-discovered his mojo and Andre Ellington is starting to remember how fast he can run. The two have created a dynamic duo alongside Palmer to help form one of the strongest/most balanced offenses in the NFL.

Although the Bengals are a tough match-up on paper, their offense looked confused against J.J. Watt last week. The defense only gave up 10 points, but that was with T.J. Yates playing quarterback. Carson Palmer will be an entirely different animal for a reeling Cincinnati Bengals squad.

Palmer should be a top-five quarterback this week, as well as the rest of the regular season (assuming the Cardinals don’t rest him once they clinch a playoff spot). Playing against his former team, Palmer will pick apart a Cincinnati team coming off a short week. His knee has looked stable so far in 2015, and you know how the saying goes – if it ain’t broke, don’t fix it.