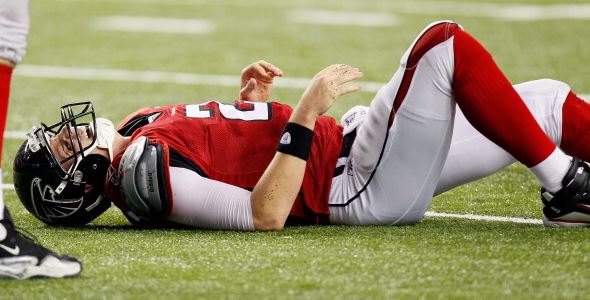 Remember when we were talking about the Falcons’ chances of going 16-0? Those were much more cheerful times for fans of the Dirty Birds…

Losers of four of their last five games, the Falcons appear to be in collapse mode. With two weeks to prepare against an Andrew Luck-less Indianapolis Colts squad, Matt Ryan’s team couldn’t pull out a victory in front of their home crowd.

An injury to running back Devonta Freeman in the first quarter crippled Atlanta’s high-octane offense, as Tevin Coleman struggled to fill the void. Atlanta managed to race out to a 14-0 lead, but their inability to run the ball once Freeman went down proved costly.

Julio Jones was phenomenal in this game, as has been the case all season, but Matt Ryan at times seemed unsure of what color jersey his teammates were wearing. Leading 21-14 from his own 1-yard line early in the fourth quarter, Ryan threw a beautiful pass across the middle to Colts linebacker D’Qwell Jackson, who returned it for a touchdown to tie the game. It was Ryan’s fourth touchdown pass on the day, but the first one to result in points for Indianapolis.

The pick-six was a huge momentum changer, and proved to be the difference in the game.

The loss is even more brutal for Atlanta when you take into account the Colts’ 24 points came from Matt Hasselbeck (40), Ahmad Bradshaw (29), D’Qwell Jackson (32) and Adam Vinatieri (42). That’s 143 years of experience beating a Matt Ryan/Julio Jones/Devonta Freeman team ripe with talent.

This wasn’t a case of one team being better than the other – it was simply an overconfident group failing to respect the ability of their elders.