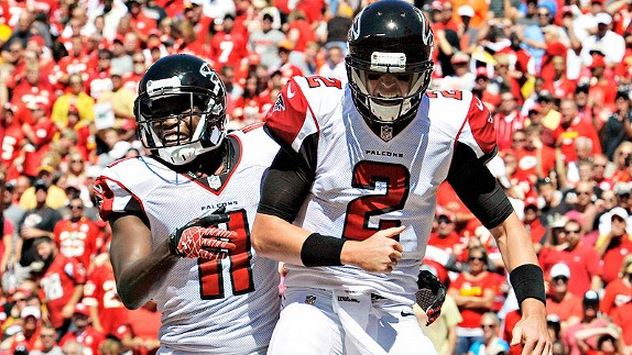 Starting the season off with three consecutive wins against NFC East opponents, the Falcons capped off Week 4 with a dominant performance over the Houston Texans. As one of six remaining unbeaten teams, not many pegged the Falcons, who finished with just six wins in the 2014 season, to be a part of this group.

The Matt Ryan-Julio Jones combo is simply unstoppable, and former college rivals Devonta Freeman and Leonard Hankerson have provided a youthful spark to the Falcons offense. Unlike recent years with Steven Jackson and Michael Turner, the Falcons’ newfound ability to run the ball has enabled the offense to become much more balanced. This balance has translated to incredible efficiency, with the Falcons scoring at least 24 points in all four games.

Defensively, the Falcons have been surprisingly good under first-year head coach Dan Quinn. Cornerback Desmond Trufant is establishing himself as an elite defensive back and veteran safety William Moore is having a career year thus far. The talent on the team is more spread out, and Quinn has been able to utilize this to his advantage.

Looking at the six teams that are still unbeaten, it’s not crazy to think Atlanta has the best chance to get to 16-0. While they are in no way the best team in the NFL right now, their schedule could not be much friendlier. Their Week 11 match-up at home against the Indianapolis Colts – arguably their toughest remaining game – comes on the heels of their Week 10 bye, meaning Dan Quinn will get an extra week to prepare for Andrew Luck’s squad.

While it’s still far-fetched to say Atlanta will finish the regular season without a loss, the remaining schedule consisting of NFC South games and road tilts against the Tennessee Titans, San Francisco 49ers and Jacksonville Jaguars isn’t exactly intimidating. Winning two games against the Carolina Panthers will likely prove to be the biggest challenge, but it’s certainly possible.

With an improved defense, a juggernaut offense and a ridiculously soft schedule, the overlooked Falcons have the best opportunity out of the six remaining teams to enter this postseason undefeated.