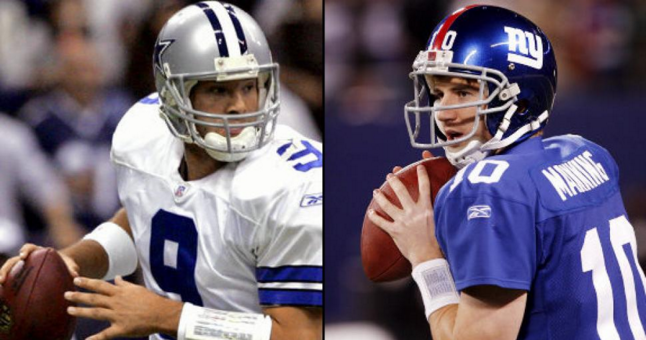 The NFC East was arguably the weakest division in football last season as the Washington Redskins (9-7) were the only team to finish .500 or better. After such disappointing seasons by the Dallas Cowboys (4-12), New York Giants (7-9) and Philadelphia Eagles (7-9), each of these four franchises seemed to have more questions than answers heading into the offseason.

Let’s take a look at what each of them has done to clean up any questions at the quarterback position:

The Cowboys actually have the most consistent performer among any NFC East squad in Tony Romo. The 11-year veteran has been phenomenal when healthy, but he was unable to stay on the field for much of the 2015 season. Without a capable back-up quarterback though, the Cowboys limped to their worst record since 1989. While Romo will be the starter when the 2016 season kicks off, Dallas will likely look to the draft or free agency to find his eventual successor. Much like the Cowboys, the Giants actually have stability at the position with Eli Manning. The 12-year veteran has somewhat resurrected his career over the past two seasons, and has teamed up with Odell Beckham Jr. to form a deadly duo. This year, Manning will look to build off last year’s career-high 35 touchdown campaign and try to guide his Giants back to the playoffs for the first time since winning Super Bowl XLVI. With Chip Kelly gone and Doug Pederson now in charge, many expected the Eagles to move on from anything resembling their former coach. Kelly’s handcrafted roster began with quarterback Sam Bradford, who struggled to ever get comfortable in Kelly’s system. To the surprise of many though, Bradford and the Eagles just agreed to a two-year, $36 million deal that includes $26 million guaranteed.

While the Redskins had the most successful season of any NFC East squad, their quarterback controversy remains the most complicated. Robert Griffin III went from hero to zero in four short years, and Kirk Cousins stepped up in a way no one could have seen coming. The former Michigan State Spartan had a remarkable year posting 29 touchdowns and 4,166 passing yards, but it’s hard not to question whether the season was a fluke. Too afraid to commit long-term to Cousins, Washington placed the franchise tag on their quarterback, which will be worth $19.95 million this season.

After all the drama surrounding each of these four teams, the same four quarterbacks who started the 2015 season (Tony Romo, Eli Manning, Sam Bradford, Kirk Cousins) appear poised to do the same in 2016.