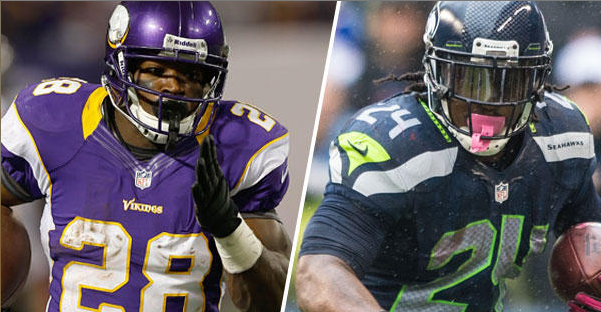 The Minnesota Vikings are hosting the Seattle Seahawks at U.S. Bank Stadium in one of four Wild Card games this weekend. The Seahawks have represented the NFC in the past two Super Bowls, while the Vikings will be looking to win their first playoff game since 2009.

With an opportunity to get the trash-talk started, Adrian Peterson actually took the high road and praised Seahawks running back Marshawn Lynch. Telling the media, “He’s ‘Beast Mode’ for a reason: He’s a physical runner. He plays fast. His lateral movement, cuts, his vision is top of the line. Even though he didn’t play much this year, I would say he’s probably the second-best back in the league. I’d give it to him, hands-down.”

The former Oklahoma Sooner has never minced words when calling himself the best ball carrier in the league, but it’s a rare comment considering Peterson is typically very critical of his running back peers.

With his Vikings hoping to avenge a 38-7 loss to Seattle earlier this season, Peterson will have to prove there is a huge gap between the No. 1 and No. 2 running backs in the NFL. The Seahawks have a clear quarterback advantage with Russell Wilson under center, meaning Peterson will somehow need to find running room against the stingy Seahawks run defense.

If Peterson proves unable to do so, the Vikings’ streak of consecutive seasons without a playoff win will jump to six, while the Seahawks will be well on their way to a third straight Super Bowl appearance.