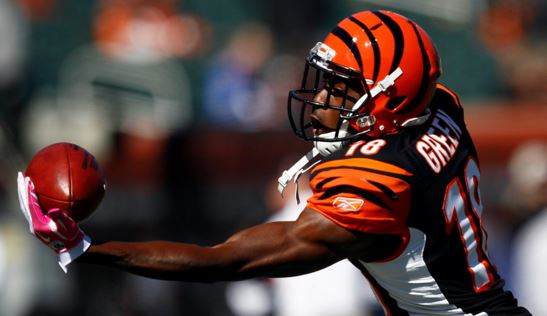 Entering Week 10, the NFL still has three undefeated teams left in the running. The best team is clearly the New England Patriots, and no one will be surprised if they finish the season with a 19-0 record. The Carolina Panthers have emerged as the front-runner in the NFC, and then, there’s the curious case of the Cincinnati Bengals.

This team’s postseason record under head coach Marvin Lewis has been very poor, but everyone knows that. Quarterback Andy Dalton assuredly understands the consequences of a few bad playoff performances. But thus far in 2015, Dalton has rediscovered his natural play-making abilities. It becomes all the more impressive when you consider that his favorite receiver isn’t providing as much help as he should be.

A.J. Green fits the mold of a prototypical No. 1 receiver in the NFL today. The only way a wide receiver gets selected with the fourth overall pick in the NFL draft is if he has attributes that are unteachable. Size, strength, long arms, huge hands, 4.5 40-yard dash – Green satisfies every requirement.

His college career at Georgia made him a logical choice for the Bengals back in 2011. With Chad Ochocinco and TJ ‘Whos-your-mama’ on their respective ways out, Cincinnati selected Green with the hope that he’d adequately fill their shoes. Well, he’s done that, and then some.

Green was supposed to be one of the best receivers in fantasy in 2015, but his owners have been frustrated with his output thus far. The most ironic part though is that Green currently sits in the top 10 among wide receivers in standard leagues. He has only had two games of over 100 yards, but it’s these two games that have inflated his total season stats.

In those two games, Green went for 21 catches, 345 yards and three touchdowns. Even more surprising, both games came on the road against AFC North opponents known for their defense (Baltimore Ravens and Pittsburgh Steelers).

Playing at home on Monday Night Football, A.J. Green will demolish the Texans and help Cincinnati stay unbeaten. He’s simply too good, and too physically gifted. Plus, Dalton likes throwing the ball to Green a little too much. Of course, that’s not necessarily a bad thing for fantasy owners who have Green on their squad.

Playing against a terrible Texans pass defense, expect Green to embarrass a non-AFC North squad for the first time this season.