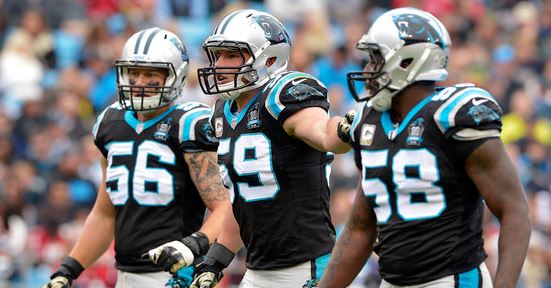 Carolina Panthers linebacker Thomas Davis has donned the black and blue for all 11 years of his NFL career. Having already overcome three ACL tears, it’s only fitting that Davis deal with one more brutal injury as his team heads to Super Bowl 50.

Midway through the second quarter of the NFC Championship Game, Cardinals quarterback Carson Palmer completed a 15-yard pass to tight end Darren Fells. During the run after the catch, Fells attempted to hurdle Davis, and the tight end’s leg collided brutally with the arm of Carolina’s linebacker.

Davis immediately headed to the locker room, and never returned. After the game, Davis told reporters: “I ain’t missing the Super Bowl. You better believe that. The early prognosis is it’s broken. We’ll get it figured out, and I’ll be ready in two weeks.” On Monday, Davis’ wife posted a photo on Instagram that showed Thomas heading in for surgery.

The 11-year veteran is the longest tenured player on the Carolina Panthers, and pairs up with Luke Kuechly to form what many consider the best linebacker duo in the NFL. Members of the Panthers’ organization expressed confidence that this deadly duo will be on the field together for Super Bowl 50.

Panthers head coach Ron Rivera said, “I don’t doubt any word he says. If he says he will be ready, I know he will be ready.” Defensive tackle Kawann Short also seemed certain Davis would be in uniform on February 7, but offered one scenario where the linebacker would be unable to play: “You will have to take his jerseys away from him — all five of them, even the ones at home too.”

With that appearing unlikely, the Panthers should be at full strength and ready to capture the franchise’s first-ever Lombardi Trophy.