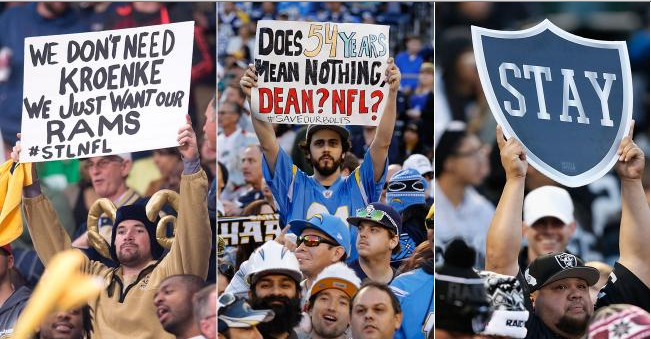 On Monday night, three NFL franchises formalized their interest in becoming the first professional football team to play in Los Angeles since 1994. The St. Louis Rams, San Diego Chargers, and Oakland Raiders all officially filed for relocation, which would be effective for the 2016 season.

Rams owner Stan Kroenke became the first person to show interest in moving when he proposed his $1.86 billion stadium project that would be built in Inglewood. A variety of NFL teams expressed a desire to move to Los Angeles after Kroenke’s proposal, but only two more ended up following through on the notion.

Playing in the two oldest stadiums in the league, the Chargers and Raiders are logical franchises to consider, especially since they used to play in Los Angeles. Of course, the Rams did as well, but they happened to move a little further east than San Diego and Oakland.

The Chargers and Raiders also recently formed an alliance by proposing the same stadium pitch to the NFL. It consists of a $1.75 billion stadium in Carson, California that would allow them to both play their home games there, despite being in the same division.

Unfortunately for the Rams, the NFL might be more inclined to select a two-team stadium. The revenue that would be generated by two teams in the second biggest market in the country is certainly very appealing.

Since the regular season just ended, this whole process has a long ways to go. A series of votes must take place from both Los Angeles city committees and the NFL owners before any more progress is made.

The city of Los Angeles would be thrilled with any NFL team at this point, but the possibility of two franchises seems hard for anyone to ignore, especially Roger Goodell.