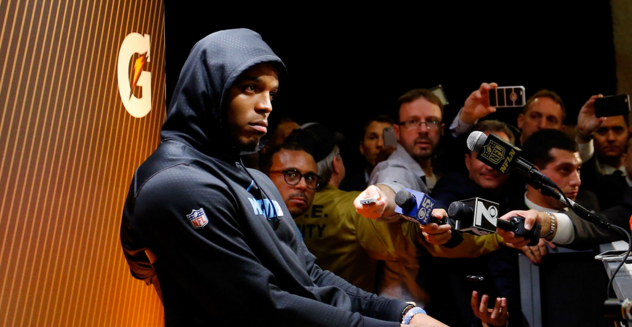 Despite the numerous errors made throughout Super Bowl 50 by Cam Newton and the Carolina Panthers, it was the MVP’s demeanor after the game that drew the ire of most fans. After dancing, dabbing and celebrating in the faces of opponents through an almost-perfect 17-1 run to the Super Bowl, Newton was a nearly unrecognizable figure in his post-game interview.

The normally energetic Newton was visibly humbled by the Broncos’ dominant performance, and offered few words to the media. The 2011 No. 1 pick gave short responses to a total of 13 questions before abruptly walking out of the room.

Now almost three months removed from the incident, Newton has come to regret his actions. Acknowledging that he hadn’t processed the loss before being bombarded by questions, Newton recognizes that he could have handled the situation in a more professional manner.

“The truth is, I represent something way bigger than myself. I’m doing it for [my fans and family] and I felt like I let them down.”

It was certainly a learning experience for Newton, as he and the Panthers had never been in a situation quite like it. The Panthers steamrolled through the regular season and were viewed as large favorites to take home Super Bowl 50 in the franchise’s second-ever appearance.

And with Newton only 26 years old while bolstered by one of the best defenses in the NFL, a third Panthers Super Bowl appearance shouldn’t be too far away.