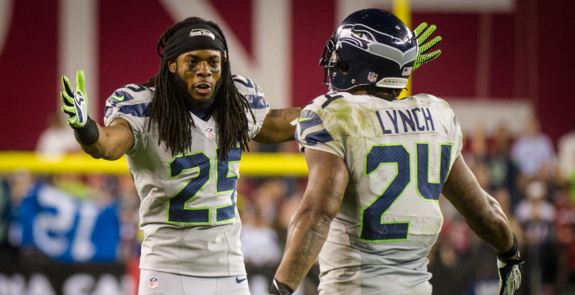 To no one’s surprise, former Seattle Seahawks running back Marshawn Lynch hasn’t spoken with the media since retiring from the NFL. Lynch bizarrely tweeted his decision to step away from the game during Super Bowl 50, and hasn’t given any indication that his stance has changed.

However, ‘Beast Mode’ has yet to fill out the necessary paperwork stating his retirement, hinting at a possible return.

Former teammate and current cornerback for the Seattle Seahawks, Richard Sherman, remains hopeful that Lynch will renege on his decision. Speaking with the NFL Network, Sherman explained why he doesn’t necessarily believe Lynch’s choice is certain, saying, “I don’t put anything past him. He’s about as predictable as a pair of dice. So I don’t try to call his plays.”

While Sherman holds out hope, the Seahawks seem fully prepared to move on. They selected three running backs in this year’s draft and have last season’s leading rusher, Thomas Rawls, to fill Lynch’s void.

“It’s obviously going to be different. We got a little sample of it last year. We had to play without him for a good portion of the season. I think we’re prepared for it in some aspects. But you never really want to be prepared for that. You would hope that he comes back. In the back of your mind, you hope he comes back and plays another year. But he doesn’t owe us anything. He’s given us everything. He’s given the game everything we asked.”

If Lynch truly does retire, he finishes with 9,112 rushing yards (36th all-time) and 74 rushing touchdowns (24th) in nine seasons.