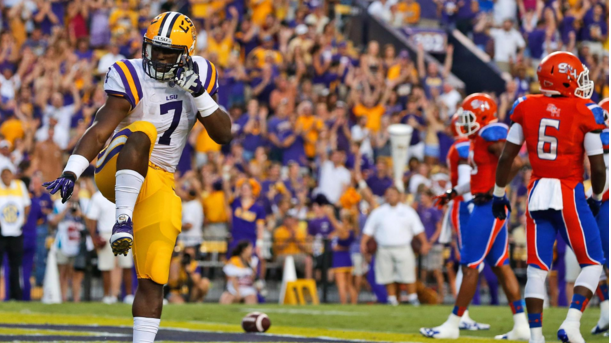 It seems every week in college football produces absolute madness, but Week 7 felt like the craziest thus far. Let’s take a look at the five biggest takeaways from this past week.

1. UCLA Cannot Stop The Run
UCLA’s defense has now allowed a total of 855 rushing yards in their past three games. Stanford running back Christian McCaffrey did them no favors, running for 243 yards and four touchdowns. Head coach Jim Mora continues to be pummeled by David Shaw and Stanford, with a career record of 0-4 while losing by an average of 18.5 points per game. The narrative feels a bit like Chip Kelly’s days in Oregon, with Stanford’s offensive and defensive lines imposing their will on undersized/athletic opponents. Chip Kelly never figured out how to beat Stanford, and after four tries, Mora is doesn’t seem too close to cracking the code either.

2. Michigan State Had Their Moment Of Divine Intervention
TCU needed a tipped pass, LSU won on a fake field goal, and it feels like it is only a matter of time before Utah, Ohio State and Baylor need a miraculous play to escape defeat. Michigan State certainly had their scare this week. The mind-boggling fumbled snap on a punt returned for a touchdown will never be forgotten when discussing the Michigan State-Michigan rivalry. It’s too soon to say the Spartans will be making an appearance in the College Football Playoff, but after beating their rivals in the most painful way possible, it already feels like they won the title.

3. Leonard Fournette Is The Best College Running Back Since Adrian Peterson
In case you still weren’t sure, Leonard Fournette is really, really good. Squaring off against one of the toughest rush defenses in the country, Fournette obliterated the Florida Gators. Running for 180 yards and two touchdowns, his combination of power, speed and agility makes him look like he’s a man among boys. While LSU will need to continue to win games to keep his name at the forefront of the Heisman discussion, there’s no question he is ready for the NFL. Opposing SEC coaches are surely crying themselves to sleep knowing this won’t be his final college season.

4. It’s Time For J.T. Barrett To Run Ohio State’s Offense
It seems Cardale Jones is still celebrating last season’s title, while Barrett is focused on bringing another one back to Columbus. Head coach Urban Meyer utilized a bizarre strategy in the first half against Penn State, letting Jones run the offense until they entered the red zone, but then bringing Barrett in to finish the drive. Barrett’s tremendous efficiency in the red zone led to him taking over all quarterback duties in the second half. The Buckeyes played like the dominant team we’ve expected to see all season once Barrett took over, signaling that Meyer needs to make the quarterback switch. While Jones certainly won’t be thrilled with this, the Twitter universe is excited to hear his reaction.

5. The American Athletic Conference Is No Joke
College football fans love to focus on the ‘Power 5’ Conferences (ACC, PAC-12, SEC, Big Ten, Big 12), but the American Athletic Conference should not be taken lightly. Memphis’ upset win over Ole Miss served as a reminder of the ever-shrinking gap in talent between conferences. With current members Houston, Memphis and Temple still undefeated, the winner of the American Athletic could have a serious case for College Football Playoff consideration. It would definitely be the Selection Committee’s worst nightmare, which just makes it all the more fun to cheer for.