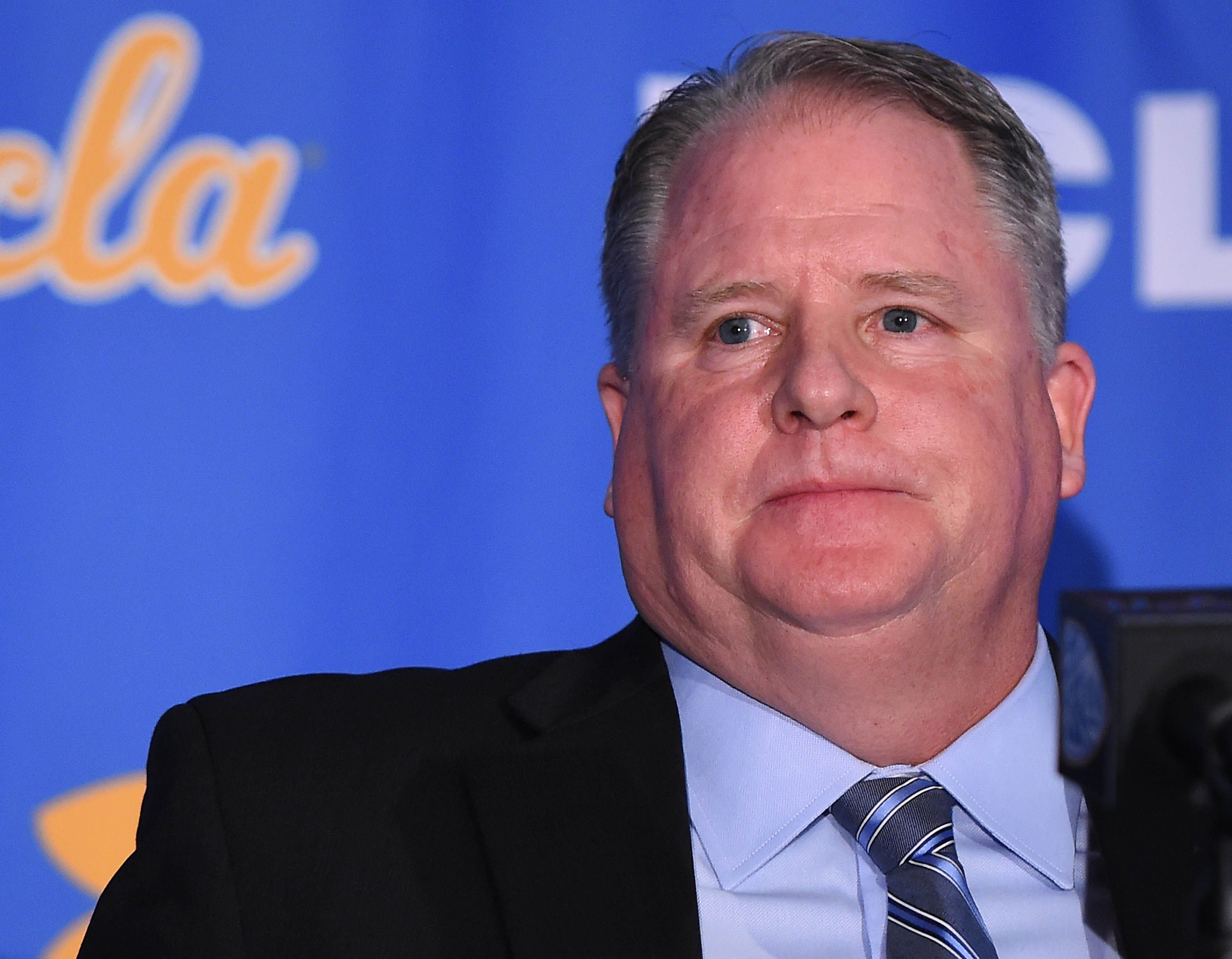 The Pac-12 saw considerable upheaval within its coaching ranks during the offseason. As Todd Graham, Willie Taggart, Jim Mora, Rich Rodriguez and Gary Andersen all departed, a plethora of proven guys — namely Chip Kelly and Kevin Sumlin — came on board. We also saw a nice mixture of unproven commodities (Jonathan Smith, Mario Cristobal) and a highly curious hiring (Herm Edwards).

This piece will rank the coaches within the Pac-12 by tiers. The trio of Petersen, Kelly, and Shaw clearly stand out as the premier group of coaches within the conference.

Petersen’s long been considered an innovative and bright mind. He single-handedly turned Boise State into the non-Power 5 power. In eight seasons with the Broncos, Petersen had a 92-12 record. Upon taking the job in Seattle, he’s quickly put his fingerprints upon the program.

In only year three, Petersen had Washington in the College Football Playoffs. He’s also led them to back-to-back seasons with at least 10 wins. Based upon Petersen’s player development skills, one can expect this trend to continue going forward.

UCLA’s hiring of Kelly was a major power move for both its program and for the conference. It helped to add credibility to a conference in desperate need of some.

Though Kelly only coached at Oregon for four season, he led the Ducks to four-straight BCS Bowl appearances. This included a 46-7 overall record, and wins in both the Rose Bowl and the Fiesta Bowl.

Kelly’s high-octane uptempo offensive scheme revolutionized the sport in a significant way. With the inherent advantages at UCLA, expect Kelly to have the Bruins far more competitive than the program ever was from a national standpoint under Mora.

Stanford is often forgotten when speaking about the elite programs in the country. The stringent academic standards — coupled with a unique culture — makes winning at the school difficult. For those reasons, it makes what Shaw has done in Palo Alto truly impressive.

In seven years, the Cardinal have accrued a 73-22 record. Shaw’s won at least 10 games in five of seven seasons, and never less than eight. Shaw operates at a consistently high level despite the disadvantages in terms of admitting players into the school. Regardless, he’s still been able to transform Stanford into a power within the Pac-12.

Whittingham doesn’t get enough credit for how good of a coach he is. Utah hasn’t won the Pac-12 South since entering the conference. For that reason, Whittingham didn’t garner entry into the top group.

Utah is not an easy job. There’s not an overly deep pool of talent to pull from within the state. Even then, BYU is a major competitor for in-state players (particularly if they’re Mormon). It’s forced Whittingham’s staff to try and unearth hidden gems in such places as Southern California, South Florida, Texas, Nevada, and the Pacific Northwest.

Since taking the post in 2004, Whittingham is 11-1 in bowl games. This includes coaching a 12-0 team to a victory over Alabama and Nick Saban in the Sugar Bowl.

Leach is one of the more colorful personalities in all of college football. Before Kelly revolutionized offensive schemes, it was Leach’s ‘Air Raid’ breaking offensive records on an annual basis.

Pullman, Washington is a quaint town — though past and current coaches know it’s not an easy place to recruit to. Without the luxury of four and five-star recruits, Leach has been forced to sign under-the-radar athletes to fit his system.

He’s done a nice job of that in recent years. After a rough first three seasons, Leach’s momentum has picked up in a big way. He’s won at least eight games in each of the past three seasons. Prior to his stint on the Palouse, Leach took Texas Tech to 10-straight bowl games.

It was a boon for Arizona to tab Sumlin as its head coach. Through stops at Oklahoma, Houston, and Texas A&M, Sumlin has developed quite a reputation as a brilliant offensive mind.

His fun-and-gun, uptempo offense led to plenty of points being scored under his direction. Though he was let go by Texas A&M this past season, it was largely due to unrealistic expectations rather than Sumlin’s ineptness as a coach.

In 10 years as a head coach, Sumlin-coached teams have qualified for bowl games in nine of those seasons. With stud QB Khalil Tate and a young roster in tow, look for that streak to become 10-for-11. Though he doesn’t have much of a resume, we’re projecting a bit on Wilcox’s bullish future. In his first season as a head coach, he led Cal to a 5-7 record. This might not appear to be very impressive on the surface. However, Cal looked far better than it did the previous few years under the former regime.

The team looked spirited, aggressive, and far improved on the defensive side of the ball. As Wilcox continues to build depth and talent, Cal should be a respectable side in the treacherous Pac-12 North.

MacIntyre appeared to be a rising star within the conference. After three-straight seasons finishing in the cellar of the Pac-12 South, the 2016 Buffaloes miraculously went 10-4 en route to a division title. With his recruits now in the program, MacIntyre looked to have Colorado develop into a contender in the traditionally wide-open South.

This hasn’t exactly gone to plan. A year removed from the 10-4 year, Colorado fell back to 5-7. In four of the five years in which MacIntyre’s coached the Buffaloes, his team has finished dead-last in the division.

Helton has brought stability to a program in desperate need of some. A well-liked and high-character individual, Helton has worked tirelessly to stabilize things for USC. After a truncated season in which he took over for Steve Sarkisian, Helton’s led the team to back-to-back seasons with at least 10 victories.

On the surface, this is a clear positive. However, this is USC we’re talking about. The program has clear advantages over practically everyone in the conference — equally from a money and prestige standpoint. USC failed to win the South Division in 2016, and has gotten blown out in a number of high-profile games under Helton’s leadership (Alabama, Notre Dame, Ohio State to name a few).

At this point, it doesn’t appear as if Helton is good enough to make USC a championship contender.

All three coaches are listed within the final tier of the conference.

Smith comes back to his alma mater after a stint as Washington’s offensive coordinator. He’ll have his work cut out for him — as Oregon State possesses arguably the worst combination of talent and depth of any team in the conference. Smith and his staff must work doggedly to unearth hidden gems across the West Coast. As Dennis Erickson can attest to, this can be done up in Corvallis.

Cristobal was promoted from offensive line coach to head coach in the wake of Willie Taggart departing for Florida State. A large contingent of the roster had championed for Cristobal to get the gig. While known for having a gregarious personality and legit chops as a recruiter, Cristobal’s head coaching track record isn’t exactly ideal .

In six years as FIU’s head coach, Cristobal went 27-47. He’s also a South Florida native without any real ties to the region. As Oregon just saw with another Florida native in Taggart, the looming threat of Cristobal perhaps leaving for another job closer to home could come to fruition down the line.

And then…we have Herm.

This hire makes literally no sense. It has the potential to be an abomination — and likely the worst hiring of any major college football program this offseason. Edwards hasn’t coached in college since 1989, and hasn’t coached anywhere since 2008. Before coming to Tempe, he previously assumed the role as an outspoken media pundit for ESPN.

Not only that, but he took the job with the understanding that both coordinators from the former staff were slated to stay on-board. As any coach can attest to, this is simply bizarre. Wouldn’t Edwards want to hire his own guys to run his specified offensive/defensive schemes? Ultimately, both Phil Bennett and Billy Napier left (which was likely a good idea).

Lastly, how will a 63-year-old coach with no prior recruiting experience be able to relate to 17 and 18-year-old kids? Edwards likely will be impressive for the recruits’ parents, but he isn’t a household name in the sporting world for anyone under the age of 30.

The ASU fan base may want to buckle in…this could be a rough next few years upcoming.