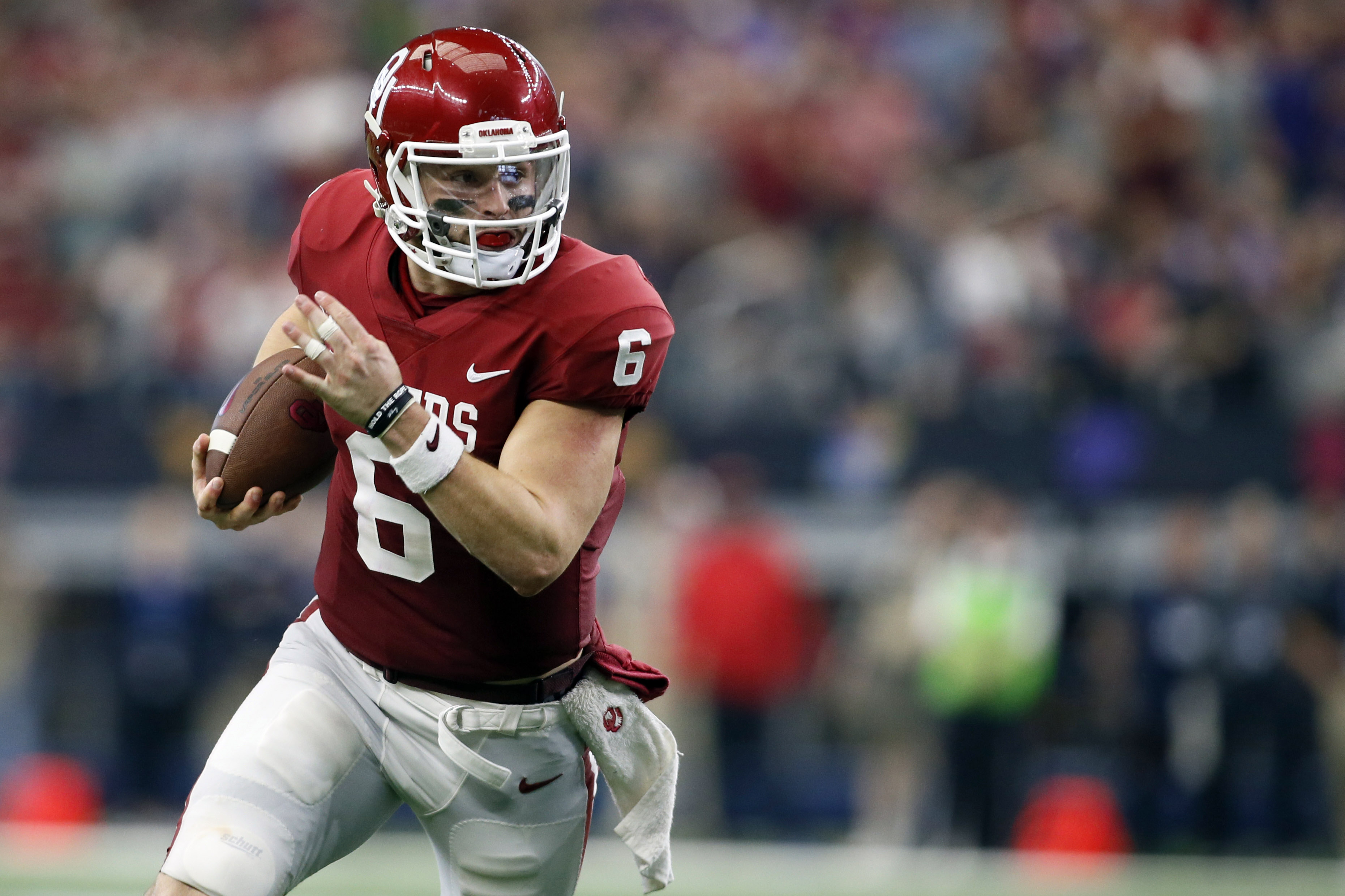 We’re given a complete contrast of styles in one of the College Football Playoff Semifinal games.

The high-flying OU offense led by Heisman Trophy-winning quarterback Baker Mayfield will be tested immensely by the Georgia Bulldogs and a ferocious defense.

This piece will analyze multiple categories leading up to the contest. At the conclusion, we’ll offer our prediction for the contest. The scheme is rooted in running the football. Few programs — if any — possess Georgia’s depth in the backfield. The trio of Nick Chubb, Sony Michel, and D’Andre Swift combined to rush for 2,720 yards and 29 touchdowns. Each are also averaging at least six yards per rush — a mark which will surely test Oklahoma’s front seven.

While Georgia’s rushing attack does draw much of the headlines, Fromm’s play cannot be overstated enough. An embodiment of consistency, Fromm has a touchdown-to-interception ratio of 21:5 on the season. The potent nature of the Bulldogs’ ground game has opened up opportunities for Fromm to find the likes of Javon Wims, Mecole Hardman, and Terry Godwin.

Oklahoma will have to respect the run. It’ll likely force the Sooners into pushing five or six bodies towards the line of scrimmage. If this scenario occurs, Fromm’s strong arm could exploit OU deep in play-action situations. The calling card for OU’s respective success this year undoubtedly emanates from the offensive side of the ball.

Mayfield is the conductor for the nation’s most explosive and diverse offense. Oklahoma is No. 1 nationally in total offense, yards per contest (583.3), offensive touchdowns (75), and yards per play (8.44).

There’s immense balance within the scheme. Coupled with pin-point execution, the Sooners simply have been a terror to slow in 2017. There’s talent littered throughout the roster on all levels. Oklahoma’s offensive line is widely regarded as one of the best in the country. This is a key aspect when factoring in Georgia’s athleticism up front along its defensive line. Four of OU’s starting offensive linemen (Dru Samia, Ben Powers, Erick Wren, Orlando Brown) were All Big-12 selections this past season.

Though billed as a pass-happy squad, the Sooners can run the ball with good effectiveness — evidenced by the two-headed monster of Trey Sermon and Rodney Anderson combining for over 1,600 yards and 16 touchdowns.

In terms of diversity, Oklahoma is a rare spread team operating with both a tight end and a fullback. Mark Andrews and Dimitri Flowers are two of the best at their respective positions. Flowers in particular is dynamic as a blocker, rusher, and even as a pass-catcher. Andrews led the team with eight touchdown receptions, and is a serious target in red-zone situations.

The Heisman Trophy winner had a 41:5 touchdown-to-interception ratio, and completed passes at a 71-percent clip. While he won’t conjure up memories of Johnny Manziel or Marcus Mariota, Mayfield’s ability to extend plays with his feet makes him even more lethal. This playground-type of ball can completely — and has completely — wrecked opposing defenses. The vaunted “SEC speed” we all hear about is completely applicable to Georgia. Smart’s defensive unit is loaded with former 4 and 5-star recruits. The headlining act for the aggressive defense is linebacker Roquan Smith. Possessing sideline-to-sideline skills, Smith is equally effective in defending backs out of the backfield as he is crashing through running lanes en route to the quarterback. He led Georgia this past year in tackles (113), sacks (5.5), and tackles-for-loss (10.5).

Collectively, this will be the most athletic defense Oklahoma has faced all year long. Windows will be smaller for Mayfield to fit passes into. Duly, his scrambling ability might be mitigated a bit by the front seven.

The other main storyline includes Georgia’s secondary attempting to slow Oklahoma’s passing attack. The Bulldogs’ secondary allows only 158.3 yards per game through the air — ranking them No. 2 nationally in the category. With J.R. Reed, Deandre Baker, Aaron Davis, and Dominick Sanders patrolling on the back end, Mayfield will have to be cautious with his throws. The Sooners have endured some defensive difficulties throughout the year — including allowing 52 points against Oklahoma State, 38 against Iowa State, and 41 against Baylor. Whilst OU plays aggressively, a leaky secondary has prevented the team from reaching its true potential.

Oklahoma allows 240.6 yards per game through the air. Categorically, it pits the Sooners in the bottom half of the Big 12 Conference — as well as No. 88 nationally. Though Steven Parker is individually brilliant, the unit as a whole is very shaky.

Linebackers Emmanuel Beal (89 tackles) and Ogbonnia Okoronkwo (17.0 tackles-for-loss, 8.0 sacks) are the headliners when it comes to rushing the passer. Quick in space and relentless off the line of scrimmage, the dynamic duo will likely be pressuring Fromm early and often.

OU has some injury issues to deal with. In addition, it doesn’t possess the depth, nor collective talent across the board when compared to its competitor in this contest. Neither Smart nor Riley have been a head coach in the College Football Playoff, though each has experience as a coordinator. Smart was the defensive coordinator under Nick Saban at Alabama, whilst Riley worked alongside Bob Stoops as OU’s offensive guru.

There isn’t much to glean from a comprehensive coaching career, either. Smart is currently in his second year as a head coach. The year 2017 marks Riley’s first year as the leader of a program. Even more fascinating is the sense that the defensive-minded Smart and the offensive-rooted Riley reside on opposite ends of the coaching spectrum when it comes to one’s specialty.

This contest truly is a toss-up.

Oklahoma undoubtedly has the more explosive offensive. Riley operates with an inventive and explosive scheme, and one could surely expect to see him install some added wrinkles for Georgia. This could include both personnel groupings as well as from a formation standpoint.

Georgia will look to disrupt Oklahoma’s rhythm as best as possible. Coming from the Saban coaching tree, Smart will bring pressure from all angles. It’ll then be incumbent upon the offensive line to give Mayfield enough time to survey the scene downfield.

On offense, the Bulldogs will look to control the clock with its smashmouth rushing attack. There’s a real possibility that Georgia will attempt to wear down Oklahoma’s smallish front seven. In doing so, the pressure will be lessened on Fromm to win the game exclusively with his arm. This isn’t the type of contest in which Georgia wants to get into a shootout. Instead, it will look to grind the opponent (and the clock) down.

The biggest advantage Oklahoma has in this contest comes from the quarterback position. Fromm is certainly no slouch (as evidenced by his play this year). Mayfield garners headlines for his on-field play, as well as his fiery personality.

Mayfield is a senior with loads of big-game experience. While mature, Fromm is a true freshman. How will Fromm navigate the contest if he throws an early interception, or fumbles the ball? He’s never been in this sort of position before. Mayfield competed in the 2015 Orange Bowl versus Clemson, and helped OU beat Auburn last year in the Sugar Bowl.

He won’t be surprised by anything Georgia throws his way. As such, OU will move on to the Title Game in Atlanta.