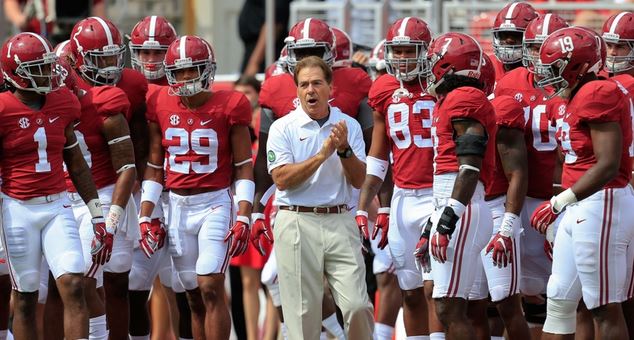 For the first time in quite a while, there isn’t a single SEC school in the top five of the AP Poll. In a wild college football weekend that offered plenty of upsets, no conference was hurt more than the SEC. Here is the current top 5 in the Associated Press Poll:

While the Big Ten and Big 12 look stronger as the weeks go by, several late-season match-ups will change that. Here is a look at the major upsets from a crazy Saturday in college football.

Are the Gators a real threat? Just two weeks after running away with a huge win in Tuscaloosa, the Running Rebels got swamped in ‘The Swamp.’ Ole Miss looked a like wreck and couldn’t get anything done on offense. Meanwhile, a shaky Gator O-line looked as sharp as ever, allowing quarterback Will Grier to throw for four touchdowns. Florida jumped 14 spots in the AP Poll and has to be considered a major threat in the SEC East.

Just when everyone thought Saban’s reign of terror was over, he leads the Tide to a huge victory against the Bulldogs. How does Lane Kiffin do it despite all those rumors and Tosh.O memes? Regardless, Alabama looked like themselves again. Their transfer recruits have played exceptionally, and no one can stop running back Derrick Henry, who rushed for 148 yards and a touchdown. While it’s hard to ever classify an Alabama win as an upset, this game will have major implications on the SEC standings.

Well it looks like if you wanted to pull off an upset this week, you had to score at least 30 points. UCLA looked unstoppable on the road last week against Arizona, but then looked completely out of sorts in their conference home opener. A team that looked like a lock in the PAC-12 South has now created a big mess. The Utes are thrilled, as this loss vaulted them into the top five. But the Bruins, who dropped 13 spots, have their work cut out for them if they want to get back in the playoff race.

What a finish in Death Valley. The Irish looked like they would be blown out in the first half, but the team rallied and almost tied it up with seven seconds left. After the huge home win, Clemson is now in excellent position to win the sub-par ACC. Moving up six spots in the AP Poll, it seems as if Clemson’s only remaining challenge should come against Florida State on November 7th. The Fighting Irish dropped nine spots, and with so many injuries across the roster, their chances of re-entering the College Football Playoff discussion seem remote.