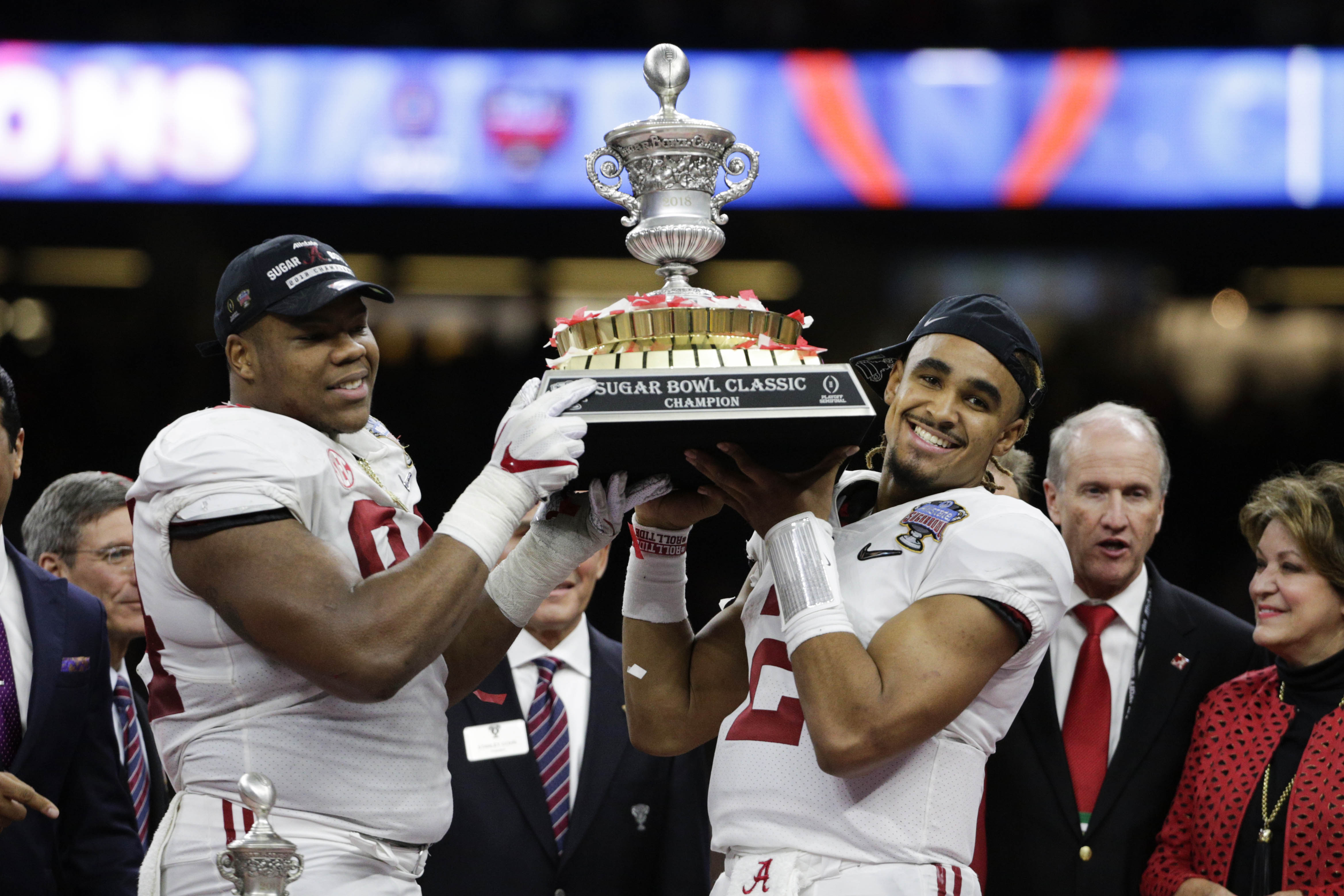 In the month leading up to the College Football Playoffs, countless media figureheads, pundits, and analysts questioned the inclusion of the Alabama Crimson Tide.

Alabama didn’t feature in the SEC Championship Game after losing to rival Auburn in the Iron Bowl. Many figured it’d be difficult to include Alabama in the final four over a team (Ohio State) that had won its conference outright.

With that said, the Crimson Tide edged out the Buckeyes slightly to gain the final spot among the nation’s best. The backlash was immensely heavy upon the playoff committee reaching this decision. Ohio State essentially got no recognition for winning what appears to be the toughest conference in college football.

Alabama only lost one game in an uncharacteristically weak SEC. There were some believing the Tide’s inclusion into the field was based merely upon reputation rather than actual on-field performance. This year’s Alabama squad had looked far from convincing, as injuries ravaged the defense. With constant conversation brewing over the validity — or non-validity — of Alabama’s appearance in the field, Nick Saban’s team kept its proverbial head down in preparation for the match-up versus No. 1 Clemson. As it turned out, Alabama was more than deserving of a spot.

The Crimson Tide systematically dismantled the Tigers on Monday night. Dominating in all facets of the contest, Alabama rolled to a cool 24-6 victory.

The offense was solid — though very unspectacular. Jalen Hurts was an efficient 16-of-24 for 120 yards and 2 TDs. The trio of Hurts-Bo Scarbrough-Damien Harris combined for 141 yards on 42 carries (3.4 yards per rush). Calvin Ridley led the team with 39 receiving yards on only four receptions. In short, the offense accrued only 261 total yards of offense.

Normally, this may be cause for concern against an elite defense. However, it’s not a huge worry when your defense is playing at an even higher level than the opponent.

Clemson entered the game averaging 429.6 yards of total offense. Alabama held them to a paltry 188 yards. The Tigers’ vaunted ground game never got on track — averaging only 1.9 yards per carry (64 yards on 33 attempts). QB Kelly Bryant was dreadful, going 18-of-36 for 124 yards and two interceptions.

It was a truly vintage performance for an Alabama defense entering with plenty of questions. As the season progressed, the unit collectively regained its health. With a month to rest and prepare for a game Clemson team, Saban’s crew absolutely was the superior bunch. The largest discrepancy came at the line of scrimmage. Alabama’s front seven roasted Clemson’s offensive line. Bryant was pressured all night, and rarely had the opportunity to make plays with his legs. As soon as the pocket collapsed, Bryant was forced into making difficult throws whilst having defenders draped all over him.

Anfernee Jennings in particular made life difficult for Clemson. He was a terror off the edge for virtually the entire ballgame. He led the Tide in both sacks (1.0) and tackles-for-loss (3.0). Defensive linemen Da’Ron Payne, Da’Shawn Hand, and Raekwon Davis manhandled the Clemson front like rag dolls. Linebackers Mack Wilson and Rashaan Evans were flying all over the field. The speed of Clemson’s receiver corps was mitigated by the air-tight coverage of Levi Wallace, Deionte Thompson, and Minkah Fitzpatrick.

Simply put, this was a statement game for a team facing plenty of doubters along the way.

Alabama did what it’s done best under Saban: muck it up. The Crimson Tide won’t put up video game-like numbers on offense, nor will it win in aesthetically pleasing fashion. Instead, the workmanlike effort is buoyed by technique, efficiency, execution, and raw physicality.

The Crimson Tide didn’t operate with the same level of dominance this past year as we’ve become accustomed to. As such, there were those questioning whether this current team was a true title contender. Based upon this result, it’s evident that the ‘underdog’ role suited Alabama just fine.

Defensive back Tony Brown spoke about the apparent motivation given to the Crimson Tide by Clemson head coach Dabo Swinney in the weeks leading up to the contest:

On Monday, Alabama will square off versus SEC foe Georgia for the National Championship. The contest will pit Saban against his former defensive coordinator Kirby Smart. The two teams didn’t play each other this season, though there’s ample familiarity between the programs schematically and personnel-wise.

This will mark the third-straight title game appearance for Alabama, and the sixth since 2009. Saban will look to tie iconic head coach Bear Bryant for the most NCAA College Football Championships (6) in the sport’s history.

No longer will anyone be doubting the Tide’s prowess. As illustrated in the semifinals, Alabama is far from being an afterthought.

The 15 Worst Sports Teams Of All-Time