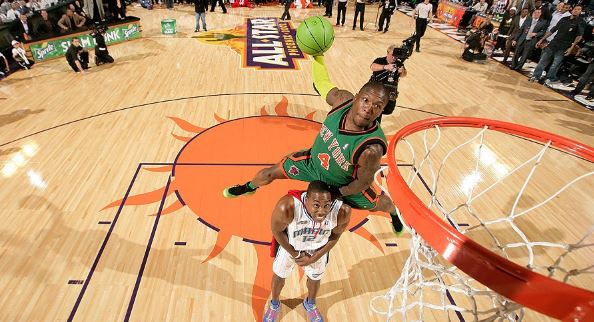 Nate Robinson, the only 3-time Slam Dunk Champion in NBA history, is ready to try a new sport. Earlier today, the Seattle native had a tryout with the Seattle Seahawks.

After 11 seasons in the NBA, Robinson had been playing overseas in Israel before deciding to give the NFL a shot. He was a star cornerback in high school, but decided to solely focus on basketball when he arrived at the University of Washington.

Standing at 5-foot-9 with tremendous leaping ability, Robinson firmly believes he could be an impact player in today’s NFL. Back in April when he first announced his intention to pursue football professionally, he was quick to point out that he needed to “get a little stronger [and] get a little faster.”

Robinson also acknowledged how difficult it would be to go from the NBA to the NFL, and cited “all the haters” as the biggest obstacle to accomplishing his goal. Despite the doubt though, Robinson said, “If somebody gives me that chance, I know they’ll fall in love with the fierce competitor that I am because I catch on quick. Once I do that, then the sky’s the limit.”

Seattle gave him that chance. Now, we’ll soon learn whether or not Robinson was right.