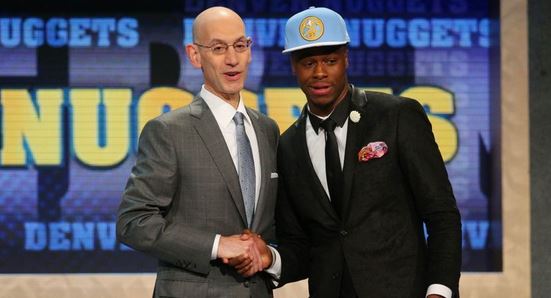 Emmanuel Mudiay is the biggest question mark among the top picks in this year’s NBA Draft. Expected to raise SMU basketball to the forefront of college basketball this past season, Mudiay instead opted to sign a one-year deal in China with the Guangdong Southern Tigers.

With inflated stats as a result of playing against inferior competition, it’s difficult to gauge where Emmanuel Mudiay ranks among his fellow draftees. But after being selected 7th overall by the Denver Nuggets, it’s clear that many front offices weren’t too impressed with the 18.0 points, 6.2 rebounds, 5.9 assists and 1.6 steals per game the point guard posted overseas.

However, Mudiay exceeded expectations during summer league, averaging a solid 12.0 points, 5.8 assists and 1.2 steals per game. Mudiay clearly needs to work on his form after shooting an unacceptable 14.3 percent from three and 50 percent from the free-throw line. Maybe he is a lefty from the perimeter, and he just doesn’t know it yet.

To make matters even better for Mudiay, Denver recently traded longtime starting point guard Ty Lawson, opening the door for the rookie to make this his team. No other rookie will be given that luxury, as Karl Anthony-Towns will be second in the pecking order to Andrew Wiggins, D’Angelo Russell will still be in Kobe Bryant’s shadow, and Jahlil Okafor is surrounded by development league talent that will stunt his growth.

Given the keys to the kingdom under Head Coach Mike Malone, Mudiay should flourish in leading an up-tempo team with his elite passing, athleticism and ability to get in to the lane. Mudiay will terrorize opponents on the defensive end with his length and should improve his perimeter game as he gains familiarity in the league (it’s not going to get worse).

Surrounded by veterans like Kenneth Faried, Wilson Chandler and Danilo Gallinari who are solid complementary pieces, Mudiay is in the perfect situation to thrive. The Nuggets likely won’t win more than 35 games this season, but recent Rookie of the Year winners like Andrew Wiggins and Michael Carter-Williams have proven that team success is not factored into the voting.

Larry Brown, head coach of SMU and longtime point guard guru, told ESPN “he’s (Mudiay) the most special point guard I’ve ever seen at that age.” At 6’5” with tremendous instincts and quickness, Mudiay has a strong chance to back up Brown’s assertion and become the first Denver Nuggets player to win the Rookie of the Year Award in franchise history.