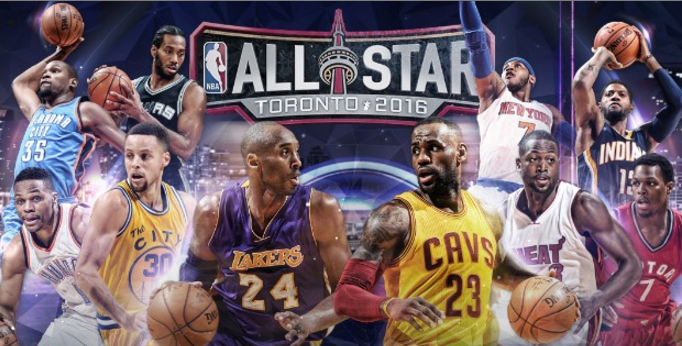 With the All-Star starting lineups locked in, let’s take a moment to break down the two teams that will start for their respective conferences this coming February in Toronto.

Lowry’s recent impressive play has bounced the Raptors out of their potential underachieving status and back into the Eastern title contention. It’s nice to see him get his due, as he has clearly been the best point guard in the East for the majority of the year. Wade has played well throughout the year, and has been a steady force in Miami’s league average offense. It might be a bit of a homer pick, but who can argue against the two-time NBA champion getting some love from the fans?

In the West, Curry and Westbrook form a theoretically unguardable backcourt with two stars playing the best basketball of their careers. Not really much of a choice here – big advantage to the West.

With the voting changes shifting away from requiring a center, we are now faced with the highly predicted no-center lineup from both conferences. Depending on where you classify Carmelo and LeBron, this will be the first time neither All-Star team even has a power forward in the starting lineup.

George is the feel-good story of the year, as his nomination is a testament to his willpower and work ethic as he has triumphantly battled back from one of the nastiest injuries the sport has ever seen. Melo and Kobe are nostalgic picks more than anything, but you can’t deny the fans what they want to see. LeBron, Durant and Kawhi are still in the primes of their careers, and will be battling for the two forward spots on the All-NBA first team at season’s end.

The West, having the worst of the six players (Kobe) and the East having the best (Bron) gives the slight advantage to the East.

Overall, the West backcourt is overwhelmingly better than any other two guards you could squander up and creates a dominating advantage. With the frontcourts being tightly contested, the difference between the guards tips the scales in the West’s favor.

It’ll certainly be interesting to see how the coaches and players round out the remainder of the rosters in the coming weeks.