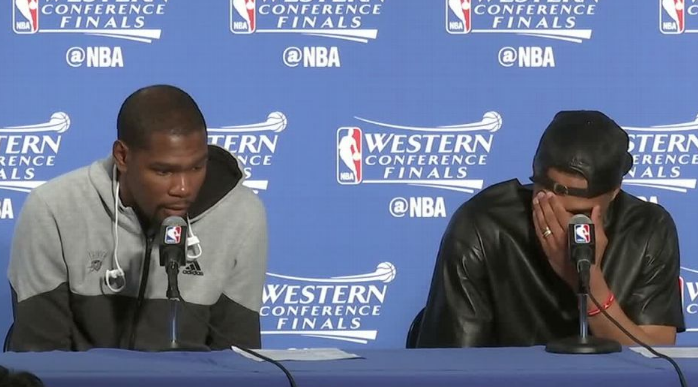 The Oklahoma City Thunder have not been the least bit intimidated taking on the Golden State Warriors, and that confidence begins with their emotional leader, Russell Westbrook. The UCLA alum has made headlines for apparent slights at Warriors point guard Stephen Curry throughout the series, with the latest one coming after Golden State’s Game 5 victory.

At Thursday night’s post-game press conference, when asked about Curry’s defense, here is how Westbrook and Durant responded:

While Durant was much more diplomatic in his answer, Westbrook proved unable to keep a straight face. Clearly annoyed with the question due to Golden State’s propensity to place Thompson on Westbrook and Curry on the less threatening Andre Roberson, it was probably for the best that Westbrook didn’t share any words on the subject.

However, the strategy worked Thursday night, as Westbrook went a miserable 11-for-28 from the field. With the series now 3-2, Golden State will look to continue saving their season with Game 6 taking place in Oklahoma City Saturday night.

As the Thunder look to eliminate the greatest regular season team in NBA history, one thing is certain – any time Curry is matched up on Westbrook, the Thunder’s point guard will be looking to attack.