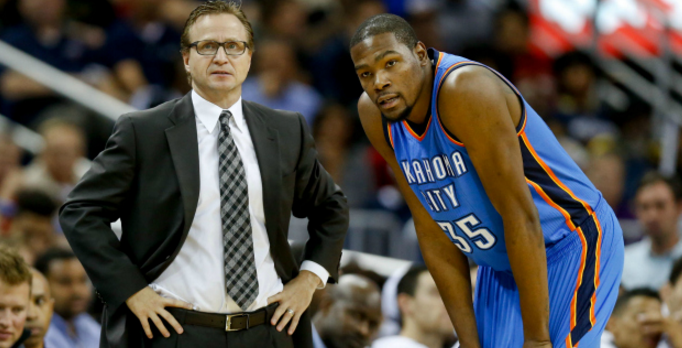 After seeing NBA superstar LeBron James return home to Cleveland to compete for his local team, the Washington Wizards hope they can convince DC-native Kevin Durant to do the same. The current Oklahoma City Thunder forward is set to become a free agent this offseason, and the Wizards are aiming to do everything in their power to sign the 2014 MVP.

On the heels of an extremely disappointing 41-41 season, Washington fired head coach Randy Wittman and has already found their replacement. Coincidentally, the Wizards hired Scott Brooks – the same coach Durant played for in Oklahoma City for the first seven years of his career.

Durant has always been vocal in his support for Brooks and wasn’t thrilled when the Thunder chose to part ways with the coach before this season. Oklahoma City brought in Billy Donovan, who has struggled to fix the Thunder’s same shortcomings that were experienced under Brooks.

It’s still a long-shot to expect Brooks’ presence to be enough to lure Durant to the Wizards, but from a basketball standpoint, his hiring makes a lot of sense for a young Washington squad. Brooks’ time with the Thunder involved a young nucleus of talent that he helped cultivate into an annual Western Conference contender – a similar scenario he will try to replicate with John Wall, Bradley Beal and Otto Porter Jr. in the Eastern Conference.

Brooks signed a five-year, $35 million contract, giving the coach some stability as he aims to mold this youthful squad. The addition of Durant would obviously expedite the process, but with the 27-year-old focused on winning championships immediately, coming home likely doesn’t make the most sense.

It’s easy to forget that LeBron chose to return to Cleveland due to Kyrie Irving’s presence and the fact that the Cavaliers held the No. 1 pick in the draft. While John Wall is an elite talent at the point guard position and Scott Brooks provides a warm sense of continuity, we shouldn’t expect Durant to be donning a Wizards uniform anytime soon.