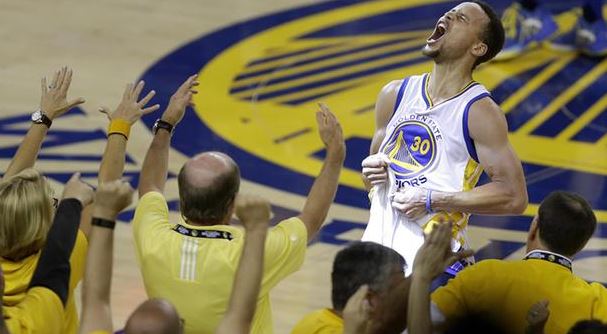 The Golden State Warriors became the 10th team in NBA history to advance after trailing 3-1 in a series, knocking off the Oklahoma City Thunder 96-88. In front of a raucous Oracle Arena crowd, the backcourt tandem of Stephen Curry and Klay Thompson lived up to their “Splash Brothers” nickname, going a combined 13-for-23 from beyond the arc.

The Warriors entered the second half of Game 7 trailing by six, but a dominant third quarter in which they outscored the Thunder 29-12 put them in front for good. Backed by smothering defense and timely/impossible three-pointers by Curry and Thompson, Oklahoma City couldn’t keep up.

Kevin Durant led the Thunder, scoring 27 points on an efficient 10-for-19 from the field. Russell Westbrook struggled mightily though, going 7-for-21 from the field with 19 points, 13 assists and 3 turnovers.

And as Oklahoma City can only dream of what might’ve been, they also have to face the never-ending drama of Kevin Durant’s free agency. During his post-game interviews, the superstar made it clear he hasn’t begun considering his options, saying, “I’m just embracing my teammates and just reflecting on the season. I’ll think about that stuff, I don’t know when.”

In the meantime, the Warriors are gearing up to take on the Cleveland Cavaliers in the NBA Finals for the second consecutive season. Unlike last year’s matchup, Cleveland enters this series fully healthy and will look to avenge last season’s defeat.

It’s a disappointing day for the Oklahoma City Thunder and their fans, but for everyone else, this NBA Finals is a matchup we have waited to see for the past two years.