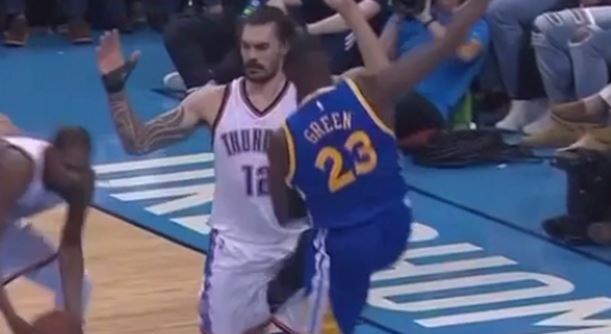 The Golden State Warriors are reeling after their Game 3 loss to the Oklahoma City Thunder, but are extremely thankful to be entering Game 4 with their entire starting lineup.

All-Star forward Draymond Green has to be the most relieved, as the Warriors’ Swiss-army knife was in serious danger of missing the pivotal showdown. Green received a Flagrant 1 foul midway through the second quarter for this play:

It was the second consecutive game that Green’s leg connected with Steve Adams’ groin, but the league elected not to suspend the Warriors’ forward for Game 4. Instead, the Flagrant 1 foul was upgraded to a Flagrant 2, and Green will be fined $25,000 for the incident.

Oklahoma City leads the Warriors 2-1 in the series, and will look to take a commanding 3-1 lead Tuesday night in front of their home crowd. Golden State has yet to lose consecutive games this season, and would certainly like to keep that trend going.

Maintaining the streak certainly got more manageable with the news that Draymond Green will be allowed to play.