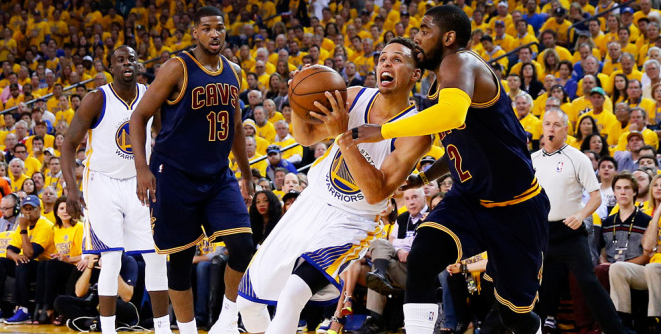 For the second consecutive year, the Warriors defeated the Cavaliers in Game 1 of the NBA Finals. However, this 104-89 victory by Golden State was unlike any game in recent memory.

Stephen Curry and Klay Thompson were limited to a combined 20 points on 8-for-27 shooting, as the Cavaliers managed to neutralize Golden State’s two most dangerous weapons. It was the fewest points in a game the Splash Brothers had combined to score all season, but opened the door for other Warriors to step up.

The Warriors’ second unit did just that, outscoring the Cavaliers’ bench 45-10. Shaun Livingston led the way for Golden State, scoring 20 points on 8-for-10 shooting. The 6-foot-7 point guard used his size to get easy shots around the rim, and was a consistent problem for Cleveland.

Just like last year’s Finals, Andre Iguodala also played a key role in helping lead Golden State to victory. The defensive stopper made life difficult for LeBron James, posted 12 points, 7 rebounds and 6 assists, and led the team with a plus/minus of +21 in 35 minutes.

Leandro Barbosa also gave tremendous minutes off the bench, as Golden State sent an early reminder that their depth is a major reason this team won 73 games in the regular season.

And while holding Curry and Thompson to their worst offensive output isn’t something the Cavaliers can continue to expect the rest of the series, there’s plenty of reason to remain optimistic. Kyrie Irving went 7-for-22 from the field, the Cavs committed 17 turnovers (leading to 25 Golden State points) and the team shot 38.1 percent from the field.

Despite their struggles all night, Cleveland erased a 14-point first half deficit to take a lead late in the third quarter, but couldn’t keep their foot on the gas pedal.

It’s a mistake Cleveland will try to avoid in Game 2 Sunday night.