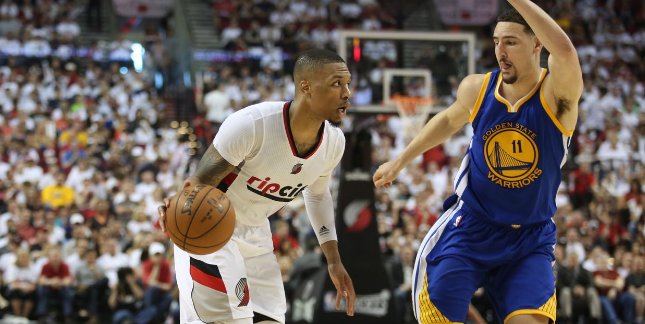 The Portland Trail Blazers climbed back into their series with the Golden State Warriors, winning Game 3 by a score of 120-108.
With the Warriors playing without MVP Stephen Curry for a fourth consecutive game, the Blazers set the pace behind their own All-Star point guard, Damian Lillard. Behind 25 points in the first half, Lillard gave Portland a 12-point lead at the break.

‘Dame’ finished the game with 40 points and 10 assists, knocking down 8 three-pointers in the process. Backed by a stellar Al-Farouq Aminu performance with 23 points on 8-for-9 shooting, the Blazers turned Game 4 into a pivotal game.

Draymond Green and Klay Thompson provided the fireworks for the Warriors on the night. Green tallied 37 points, 9 rebounds and 8 assists, while Thompson added 35 points for the defending champions. But with only one other player scoring in double figures, and having no answer for Lillard, the Warriors now face a predicament before Game 4.

After ruling Curry out for Game 3, Warriors head coach Steve Kerr said the possibility remained that Curry could play in Game 4. Had the Warriors won Game 3, it is likely Curry would have had a few extra days of rest, but Lillard knew the importance of taking Game 3.

“Our season was on the line,” Lillard explained. “After the first quarter, I went into our coaches’ huddle and I said, ‘Put me back in earlier than I usually go back in.’ A minute and a half into the second, he was calling my name.”

After the Game 3 setback, it is not hard to envision Curry approaching the coaching staff with a similar message. Game 4 Monday night in Portland is another must win for the Blazers, and regardless of Curry’s status, Green remains confident in the Warriors chances.

“We’ve proven we can beat them without Steph on the floor.”

Golden State will need to before this series gets a little too close for comfort.