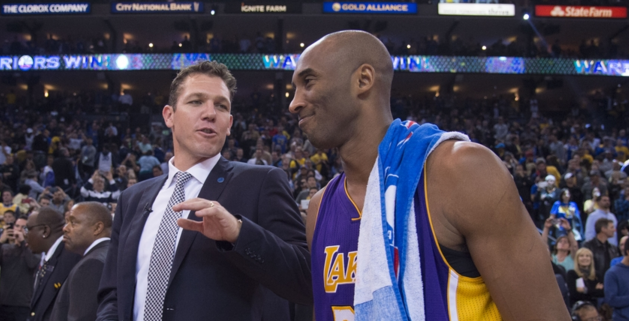 Luke Walton has agreed to be the Los Angeles Lakers’ new head coach, only five days removed from the firing of Byron Scott. In nine seasons with the Lakers as a player, Walton was a part of winning two championships. Walton, 36, becomes the youngest head coach in the NBA, only three years removed from his retirement.

Currently an assistant for the Golden State Warriors, Walton was given permission to interview with the Lakers following the Warriors’ first-round victory. With head coach Steve Kerr dealing with back surgery complications and unable to coach the first half of the season, Walton led the Warriors to a record 24-0 start, and an overall record of 39-4. Walton finished eighth in coach of the year balloting despite being an assistant.

“I loved everything about my time at Golden State and learning from Steve [Kerr],” Walton told ESPN. “I’ll forever be grateful to him, the organization and the team. But I have always dreamed of being a head coach and the chance to do that for an organization like the Lakers doesn’t come around very often.”

After originally stating the Lakers organization would go through an exhaustive search to find their next head coach, Walton, ultimately, was the only candidate interviewed.

“We’re excited to bring Luke back to Los Angeles, where we feel he’s going to start an outstanding coaching career,” Lakers general manager Mitch Kupchak said in a release. “He’s one of the brightest young coaching minds in the game, and we feel fortunate that he’ll be leading the on-court future of our team.”

Many in the game, including Phil Jackson and Kobe Bryant, have long admired Walton’s basketball mind. In November, Bryant pegged Walton as a future head coach in the league.

“He always had a really brilliant mind and understanding flow and tempo and spacing and how to manage a team the right way.”
Following the conclusion of the Warriors’ postseason, Walton will assume his new position with the Lakers. He will inherit a young core including D’Angelo Russell, Jordan Clarkson, and Julius Randle.

With the Lakers coming off their two worst seasons in franchise history, the Lakers hope Walton is the man to return the franchise to its spot atop the basketball world.