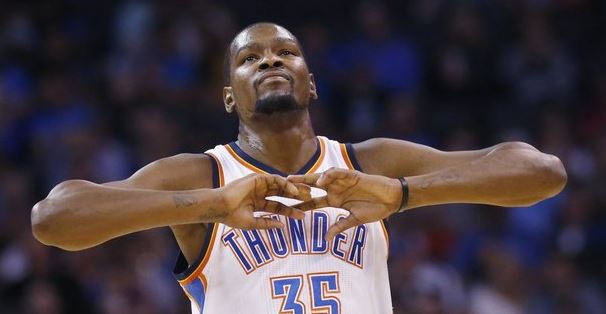 As a global NBA superstar, Kevin Durant has fans all over the world. Living halfway across the globe, few ever have the chance to see the Oklahoma City Thunder forward in action. But when a German foreign-exchange student named Jurek Hegeman bought his ticket to the Pistons-Thunder game, he thought he was going to see his dream come true.

Unfortunately for Hegemann though, that wasn’t the case.

The Thunder, who currently sit comfortably as the No. 3 seed in the strong Western Conference, decided to let Durant and power forward Serge Ibaka take the night off. Head coach Billy Donovan revealed that the upcoming playoffs and bunched schedule led to this heartbreak for the German fan.

“It’s a collaborative effort between the medical staff, myself and the players,” he said. With the back-to-back, we really felt like it was an opportunity to do that for Serge and Kevin.”

ESPN beat reporter Royce Young broke the news to Hegemann and Kevin York – the high school P.E. teacher who Hegemann is staying with. They looked much happier before receiving the news from Young: You can’t fault the two for hoping to see Durant live. He’s averaging 28 points, 8.3 rebounds and 5 assists per game and is still one of the top-five players in the league.

And while Hegemann and York surely left the Pistons game disappointed, the Thunder know a well-rested Durant serves as the only chance for an NBA title this postseason.