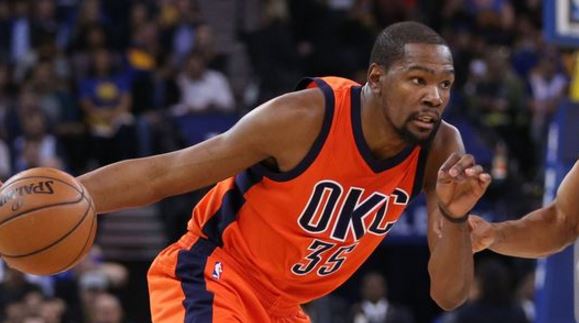 The Oklahoma City Thunder are in the recruiting war of their lives as they try to convince superstar Kevin Durant to remain with the only professional franchise he has ever played for. And while it will by no means be easy to retain Durant, the Thunder will at least be the first to meet with the 27-year-old superstar.

Securing the first face-to-face meeting with Durant is a tremendous boon for the Thunder, who are trying to fend off the Golden State Warriors, San Antonio Spurs, Boston Celtics, Miami Heat and Los Angeles Clippers. The meeting will take place on Thursday (June 30), giving Oklahoma City a 24 hour advantage before any other team can communicate with the 9-year veteran.

League rules stipulate that contracts with free agents can’t be discussed until 12:01 am on July 1, meaning OKC’s sit-down with Durant will primarily center on topics like the team’s intended direction.

If Durant were to re-sign with the Thunder, it’s believed that he would sign a two-year max contract with a player option after the first year. That way, he can opt out and become a free agent next season alongside Russell Westbrook, and once again capitalize on the expected salary cap increase.

However, Durant has maintained throughout the process that his decision is more about winning than money. Looking for the best opportunity to immediately win titles, Oklahoma City is hoping their Western Conference Finals appearance and blockbuster trade netting Victor Oladipo, Ersan Ilyasova and Domantas Sabonis is enough to convince Durant to stay.

If not, Oklahoma City will be in for some very, very dark days.