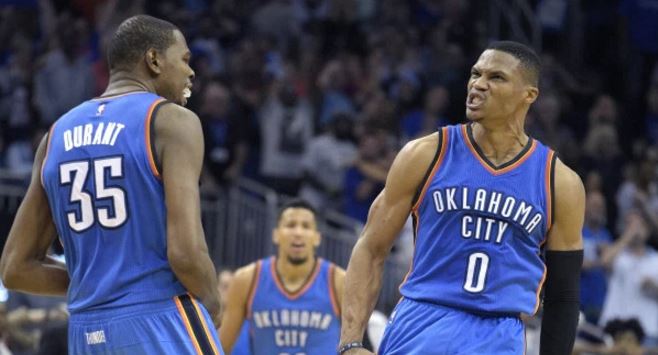 The 73-win Golden State Warrior team is headed back to Oakland after the 24 point bashing handed to them on Tuesday night. For the second consecutive game, the Thunder thrived by adopting Golden State’s brand of play: feeding off the energy of the crowd, breaking out in transition, and wreaking havoc on the defensive end.

A mirror image of Game 3, Oklahoma City put up 72 points in the first half behind the stat-stuffing tandem of Russell Westbrook and Kevin Durant. Westbrook proved to be a matchup nightmare for the shorter and skinnier Curry, as he finished the game with 36 points, 11 assists, 11 rebounds (more than any other GSW player) and 4 steals. In Game 5, don’t be surprised if you see more of Klay Thompson guarding Westbrook, while Curry will likely switch onto whichever guard is playing off the ball.

That off-guard has typically been nonexistent for the Thunder, up until Andre Roberson’s explosion in Game 4. The defensive-minded wingman dropped 17 points while using his length to make life difficult for Thompson on the other end. Per Basketball-Reference.com and their player index, this is the first time Roberson has scored 15+ points since his collegiate days as a member of the Colorado Buffaloes.

Now one win from an NBA Finals berth, this Thunder run could go down as one of the best stretches in playoff history. The quick clean-up of the gritty Mavericks, a six-game closeout of the always-ready 67-win Spurs, and a demolition of the greatest regular season team in NBA history is an impressive resume for this resilient Oklahoma City squad.

However, the Thunder still need to secure that ever-elusive series-clinching win. And after watching the Warriors easily rattle off win streaks this whole season, the Thunder know better than to take their foot off the gas pedal.

Nothing is guaranteed, but with the way Oklahoma City is playing, they should be well on their way to their first NBA Finals appearance since 2012. And just like four years ago, LeBron James will (most likely) be the last man standing between the Thunder and the franchise’s first-ever Larry O’Brien Trophy.