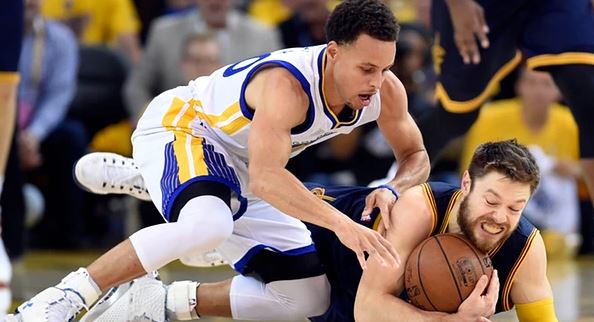 The NBA’s new brand of non-contact basketball makes the word “dirty” a more obsolete term when describing players. But when 24 people within the NBA voted, 13 of them agreed that Cleveland Cavaliers point guard Matthew Dellavedova was the dirtiest player in the league.

Steven Adams (Thunder), Andrew Bogut (Warriors), Matt Barnes (Grizzlies) and Serge Ibaka (Thunder) were the other players to receive votes, but Dellavedova “won” this one in a landslide.

Last postseason, Dellavedova managed to upset just about every opponent in Cleveland’s path.

In the Eastern Conference Semifinals, the Australian native wrapped his legs around Taj Gibson which led to Chicago’s power forward kicking him (and looking like the instigator). In the Conference Finals, Dellavedova lunged for a loose ball and rolled over on to Kyle Korver’s ankle which cost Atlanta’s shooting guard the rest of the series. Dellavedova’s time in the NBA Finals was spent guarding (and being very physical with) Stephen Curry, but he was frequently seen talking trash to the entire Warriors squad.

Despite his theatrics throughout Cleveland’s NBA Finals run, the jury still remains somewhat undecided on Dellavedova. One Western Conference coach was quoted saying Dellavedova is “as dirty as they come. When you’re hurting people, that is not OK.” However, in the opposing conference, a coach described Dellavedova as a player who is “is accidentally dirty. He can’t help himself. He’s a quality backup point guard.”

Currently in his third NBA season, Dellavedova has managed to cut out a nice little niche for himself in Cleveland. Averaging career-highs in points (8.3) and assists (4.9), it appears Dellavedova will be drawing the ire of his opponents for years to come.