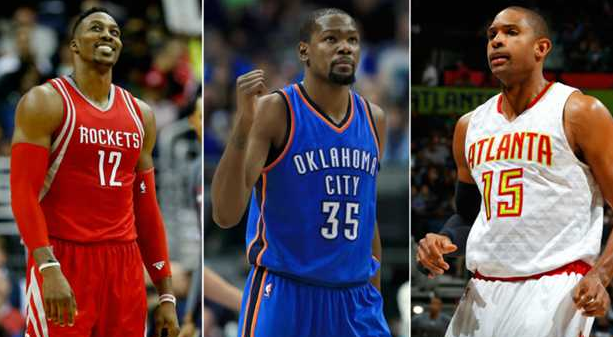 NBA free agency is officially underway, and with the cap jumping from $70 million to $94 million this season, plenty expect this to be the craziest free agent period in NBA history. Just over 36 hours into the madness, it’s fair to say that hasn’t been an exaggeration.

Here’s a look at the key signings that have taken place so far: Dwight Howard has reached an agreement with the Atlanta Hawks for three years, $70.5 million. It is Howard’s fourth team since joining the league in 2004, but one that comes as far from surprising. As an Atlanta native, Howard has been linked to joining the Hawks throughout his career and has finally made the move.

With Howard having fewer suitors than expected and the Hawks unsure of Al Horford’s free agency plans, the agreement makes perfect sense for both sides. The 3-time Defensive Player of the Year will anchor the Hawks’ defense and should be rejuvenated after a disastrous stint with the Houston Rockets. After Kevin Durant and LeBron James, many felt as if Hassan Whiteside was the next biggest free agency prize. Despite character concerns, Whiteside turned in a dominant 2015-2016 campaign, leading the league with 3.7 blocks per game.

It was reported the Los Angeles Lakers, Dallas Mavericks and incumbent Heat were the three teams most interested in Whiteside’s services. However, only the Mavericks and Heat were able to secure meetings, with Miami quickly winning out. After accumulating $3.2 million in his first four seasons, Whiteside’s new contract is expected to be for four years and $98 million. After a messy divorce from the Dallas Mavericks, Parsons was deciding between the Portland Trail Blazers and Memphis Grizzlies. With both teams offering a max contract, Parsons ultimately decided to sign with the Grizzlies.

It’s a surprising decision considering Parsons had the chance to pair with one of the best/youngest backcourts in Damian Lillard and CJ McCollum, but the move makes a bit more sense after hearing this news… Drummond was technically a free agent, but there was never any doubt that he would sign a max extension to remain with the Pistons. The 23-year-old superstar agreed to a contract with Detroit for five years and $130 million. The 9-year veteran who has played his entire career with the Grizzlies won’t be leaving anytime soon. After rumors of joining the Dallas Mavericks or San Antonio Spurs started heating up, Conley quickly dispelled them by agreeing to a five-year, $153 million contract with Memphis.

With a core of Coney, Parsons, Zach Randolph and Marc Gasol firmly in place, the Grizzlies have been one of the biggest winners in the first 36 hours of free agency. When the Wizards’ hopes of luring DC native Kevin Durant back home vanished, re-signing their smooth-shooting 2-guard became their No. 1 priority. Washington quickly reached an agreement for five years and $130 million, shoring up an exciting young backcourt of Beal and John Wall. The 31-year-old was pursued by plenty of teams, but few would’ve expected the Lakers to be on that list. Lo and behold, Deng agreed to a four-year, $72 million contract to join the Lakers. Deng’s versatility on both ends of the floor will be a tremendous boon for the Lakers, but with Brandon Ingram and Julius Randle expected to fill the forward positions, it remains to be seen where exactly Deng fits in. Arguably the most surprising move of the night was the Lakers’ quick and intense pitch to Timofey Mozgov. Fresh off an NBA title, Mozgov was the first free agent to strike a deal once the free agency frenzy began. After Los Angeles’ Roy Hibbert experiment failed last season, the Lakers hope Mozgov’s four-year, $64 million deal can shore up their interior. In one of the least surprising moves, Noah will be following Derrick Rose to join the Knicks. Noah and New York agreed on a four-year, $72 million contract and helps fill out a strong starting lineup. With Rose, Carmelo Anthony, Kristaps Porzingis and Noah anchoring the middle, the Knicks promise to be one of the most intriguing teams next season. In one of the quietest marquee signings, Joe Johnson has signed with the Utah Jazz for two years, $22 million. Johnson provides a much-needed scoring punch to the defensive-minded Jazz and will likely come off the bench to anchor the second unit. It’s a sneaky good acquisition for a team who appears poised to make the playoffs next season. As the modern-day 3-and-D player, Bazemore attracted plenty of interest from teams across the league. After hearing from everyone though, Bazemore ultimately decided to stay in Atlanta on a four-year, $70 million contract. As a restricted free agent, Dellavedova agreed to a four-year, $38.4 million deal with the Milwaukee Bucks. The NBA Champion Cavaliers have until July 10 to match the offer, but most people don’t expect them to do so. “Linsanity” will officially be taking his talents to a new franchise for the sixth time in his career. After a strong year in Charlotte, Lin translated it into a three-year, $36 million with the Brooklyn Nets.