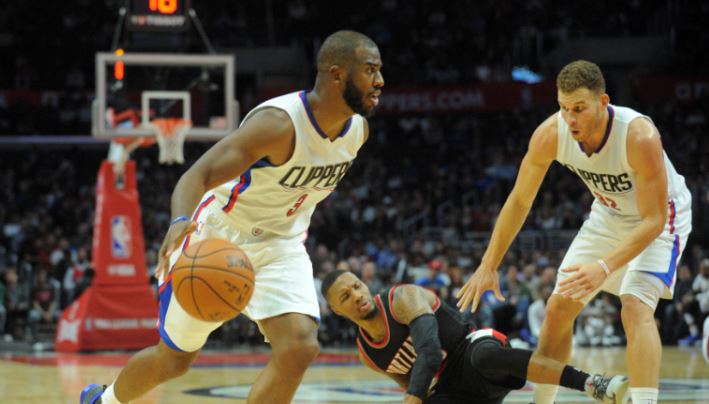 Eight games into the NBA regular season, the Los Angeles Clippers sit alone atop the Western Conference with a league-best 7-1 record. The Clippers’ sole loss came at home against red-hot Russell Westbrook and the Oklahoma City Thunder on the second night of back-to-back games. The Clippers have responded with four consecutive victories by an average margin of 24.5 points a game, including a 24-point trouncing of the San Antonio Spurs.

Perhaps the main reason for the Clippers’ dominance has been their defense. The Clippers have consistently been a solid defensive team, ranking in the top 10 in defensive rating three out of the last four years, but their effort and dedication on that half of the floor this season has been particularly impressive. The Clippers rank first in the league in defensive rating, allowing only 91.39 points per 100 possessions and have allowed an opponent to score more than 100 points only once, in the season opener to Portland.

Credit Chris Paul and Deandre Jordan for setting the tone defensively, and bringing consistent leadership on that side of the ball. Luc Mbah a Moute, who has been asked by Doc Rivers to guard the other team’s best offensive player on a nightly basis, leads the league in defensive player rating. He has locked up players ranging from point guard Dame Lillard to superstar small forward Kawhi Leonard.

The Clippers are playing defense with the urgency of a team that can feel its championship window closing.

The Clippers’ defense is not the only place in which the club has shown vast improvement this season. With the additions of Raymond Felton and Marreese Speights, the Clippers’ second unit has made a much needed leap, after two straight campaigns fueled by Jamal Crawford’s scoring and not much else. Felton is shooting 50 percent from beyond the arc, and is playing like he has something to prove following disappointing stints with the Knicks and Mavericks. Speights brings the attitude and experience of a champion, not to mention his knack for scoring and sweet shooting stroke. Speights shot 38 percent from three with the Warriors last season, and creates more space on the floor for attackers, like Crawford and Austin Rivers, to operate.

Doc Rivers has also done a nice job of being creative with his lineups, and staggering the minutes of his star players so that the Clippers can always have one of Blake Griffin, DJ, and CP3 on the floor at all times.

Finally, the Clippers as noted repeatedly by Chris Paul in post-game interviews, have been playing with a higher level of commitment and buy-in this season than in the past. Blake Griffin has embodied this new outlook. Griffin has upped his game in a number of ways this season. He has worked out the hitch in his jumper, expanded his shooting range, and sharpened his passing and ball handling skills, but it is his new demeanor on the court that has stood out the most. Blake has a history of chiding referees and getting in scuffles with opponents, but this season he has been all business. Even after taking hard hits on obvious fouls, he has calmly walked away from the situation to avoid trouble.

Blake’s improved attitude makes a difference for the Clippers, even when he’s not on the floor. He has routinely been the first person off the bench to congratulate his teammates, and can regularly be seen celebrating big plays on the sidelines. He seems healed from the physical and emotional wounds of last season, and ready to lead his team to the playoff success that has eluded them for so long.